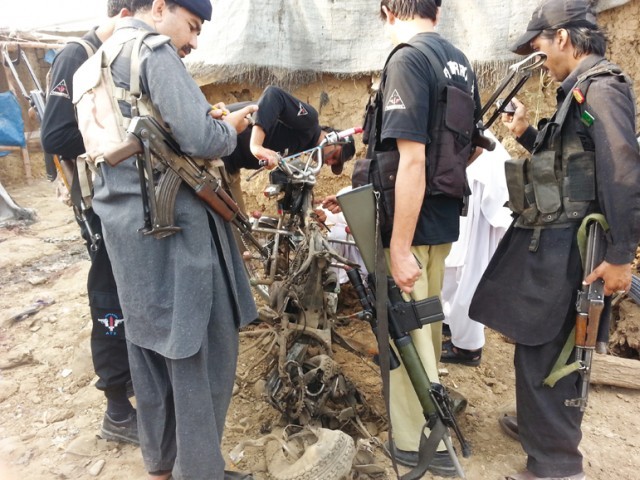 Security officials inspect the site of the blast at the Khwaja Muhammad IDP Camp. PHOTO: AFP

HANGU / PESHAWAR: At least eight people were killed and a dozen others injured on Sunday when a blast ripped through a camp for internally displaced persons (IDPs) in Hangu.

The blast destroyed a large portion of a makeshift market set up inside the Khwaja Muhammad IDP Camp, which mainly houses displaced families from the Orakzai tribal area.

Six people died immediately from the blast, Hangu District Police Officer (DPO) Anwar Saeed Kundi told journalists. Fourteen others were initially wounded, he said, adding that two of them succumbed to their injuries while being moved to a hospital.

Those killed in the blast included three minors, identified as 10-year-old Shamsa, eight-year-old Khalil and six-year-old Sohail by the administration of the Hangu District Headquarters Hospital. The rest of the deceased were identified as Lal Wali, Sher Wali, Khalil, Muhammad Sadiq and Faizul Amin.

According to DPO Kundi, the attack was carried out with a booby-trapped motorcycle, parked within the limits of the camp to cause ‘maximum damage’. He confirmed that the IDPs housed in the camp were the main target.

Around seven kilogrammes of explosives were used in the bomb, Bomb Disposal Unit official Asadullah told The Express Tribune. The blast destroyed the motorcycle that the explosive device was strapped to, he said.

The attack spread fear and panic among the camp’s residents, who had only recently been threatened by militants to vacate the camp.

Chief of the IDP camp, Said Malang, recalled what he witnessed with horror. “I saw this huge ball of fire leap towards the sky, after which thick black smoke engulfed the camp,” he said. “There was dust everywhere.”

Muhammad Sadiq, one of the wounded, trembled as he remembered the incident. “I was selling tomatoes to a child when I suddenly blanked out with the explosion,” he said. “When I regained consciousness, I saw the same child lying dead in a pool of blood.”

Malang, who also heads the jirga within the camp, said this was not the first time the inhabitants of the camp had been threatened or attacked by militants.

Sadiq, meanwhile, lamented being drawn into a war “which we have nothing to do with.”

“Not a single person living in the camp did anything which would prompt militants to take revenge from us… but still we were targeted,” he said. “We have to battle for our survival even though we have nothing to do with this fight.”

A Saddar police official said that while a case had been registered, no formal FIR had been lodged till the filing of this report.

The Hangu DHQ hospital administration, meanwhile, said some of the more critically wounded blast victims were being moved to Kohat and Peshawar.

Khyber-Pakhtunkhwa (K-P) Chief Minister Pervaiz Khattak issued a statement strongly condemning the blast and announced compensation for the victims under the Shuhada Package.

The chief minister ordered an inquiry and directed senior officials to submit a detailed report. He also directed the Hangu police and district administration to immediately launch a crackdown on terrorist elements and contact border authorities of Orakzai Agency, especially in the backdrop of Operation Zarb-e-Azb.

Pakistan Peoples Party Chairperson Bilawal Bhutto Zardari also denounced the Hangu blast and sympathised with the families of the victims. “The bomb attack on the IDPs who are making personal sacrifices to ensure the success of Zarb-e-Azb is the worst form of terrorism imposed on us,” Bilawal said in a statement.

Earlier this year, in May, militants from the Tehreek-e-Taliban Pakistan (TTP) threatened to torch the Khwaja Muhammad IDP Camp if it was not evacuated by June 11. As many as 150 families subsequently left the camp, but no substantial security measures were taken.

Later, on June 10, militants launched a rocket and grenade attack on the camp. Although no loss of life was reported, four tents were destroyed in the incident.

Tribespeople from the upper part of Orakzai Agency have been displaced since 2010. Although some families have been repatriated intermittently, many people from the tribal area have still not been cleared for return and have no option but to live in IDP camps.

An estimated 1,100 families are living at the Khwaja Muhammad Camp, according to Said Malang.

Another high-intensity bomb was defused by BDU officials in Hangu on Sunday. The bomb, which officials said was minutes away from detonation, was planted near a stone crushing machine by militants.

A case has been filed and investigations are under way, officials said.