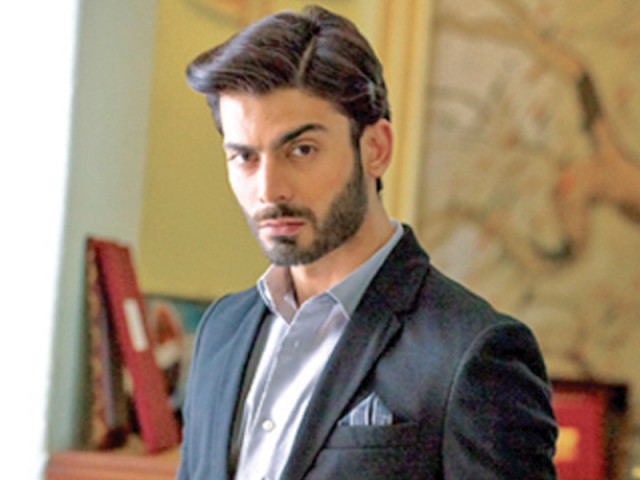 With his form-fitting suits, silk handkerchiefs, bandhgala waistcoats and sherwanis, Khan is the epitome of aristocratic chic. PHOTO: PUBLICITY

With women on both sides of the border swooning over actor Fawad Khan and his fashion choices in his latest film Khoobsurat, men in Pakistan may want to follow suit for the upcoming wedding season. Khan plays a prince named Vikram Singh Rathore in the frothy romantic-comedy and his dashing style has drawn almost as many comments as Sonam Kapoor’s sartorial choices in the film.

With his form-fitting suits, silk handkerchiefs, bandhgala waistcoats and sherwanis, Khan is the epitome of aristocratic chic. Staying true to the prince’s decorous character, his look for the film is distinctly formal. This is not a character you can see lounging around in a t-shirt and jeans. He has been styled by Indian designer Raghavendra Rathore, who cleverly makes Prince Vikram look prim, but not pretentious or old-fashioned.

Rathore has focused on sharp tailoring for Khan with dark-fitted suits, tailored blazers and skinny ties. His desi outfits mainly comprise classic Jodhpuri bandhgalas, which feature no busy embroidery and embellishments. Rathore said in an interview, “The look for Fawad’s character is classic, with clean cuts in bandhgala, waistcoats and suits,” reported the Indian Express. “Even when the actor is in casuals, the character of a modern prince is required to come through. The clothes were made for all seasons with an emphasis on summer and a dash of colour.”

Commenting on how he devised the look for Khan’s character, Rathore said, “We created profiles of 100 princes and combined details from all the looks for his character Vikram Rathore in the film. He had some reservations initially, but once he believed I had the potential to put it together, he was more open and in the end, he really liked the look.”

He wanted to give Khan’s character a contemporary yet regal touch, so he focused on tailoring and understated chic, using accessories to bring the look together. “The classic RR collections were made available for the film, keeping in mind the core idea of modernism juxtaposed with the classic,” said Rathore, according to the Asian Age.

Key features of Khan’s look include a modern, skinny silhouette and the judicious use of accessories, such as silk handkerchiefs, smart loafers and beautiful watches. Style thieves should note the way Khan’s preppy look is softened using folded cuffs, loosened ties and soft layering. He wears waistcoats with both western and eastern ensembles, often with a trademark kerchief tucked into the front pocket. Khan’s eastern wear in the film is particularly Indian in style, with straight pyjamas rather than shalwars and shorter kurtas than are generally worn here. Check out collections by menswear maestros Amir Adnan and Deepak Perwani for well-fitted, understated sherwanis and waistcoats. You can opt for designer Arsalan Iqbal for straight pyjamas, and remember to roll up your cuffs for that essential contemporary feel. For western wear, Hassan Sheheryar Yasin, Republic and Moosajees offer diverse designs.

Khan’s style from Khoobsurat is fun and attractive, but it is something you should attempt once in a while for slightly more formal occasions. For those of you wanting to channel Khan’s khoobsurat style, here’s a checklist:

1.  Insist on impeccable tailoring, preferably in a plain, dark and good-quality fabric.

2.  Straight-fitted trousers or skinny trousers are necessary for that lean look.

3.  Stock up on silk handkerchiefs – let them provide the only spot of colour to your outfit.

4.  Splurge on some smart shoes, preferably loafers or brogues in pure leather.

5.  Invest in a quality-leather watch

6.  Wear waistcoats if they are suitable for the occasion

7.  Lounge in eastern wear but always with a sherwani waistcoat for that formal touch. Embrace the bandhgala.

8.  Roll up your cuffs – all the more reason for showing off your watch and essential for giving a modern edge to your look.

9.  Grow a short beard. It looked great on Ranveer Singh and great on Fawad Khan. Just make sure you maintain the uber-short length; any hint of bushiness will kill the look.

10. Hit the gym but opt for low-intensity fat-burning workouts with a small amount of weight training. Lean muscle is what you’re aiming for here rather than bulging muscles of yesteryear.

Oxford-grad Salima Feerasta is a social commentator and lover of style in any form or fashion. She tweets@karachista