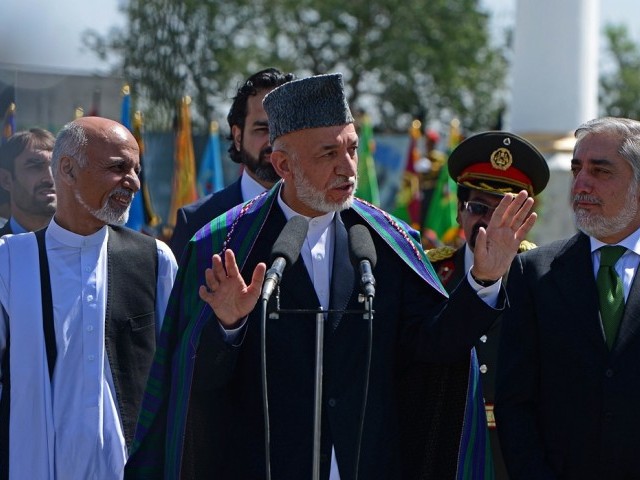 “Pakistan always wanted two things from Afghanistan to which we never agreed—the recognition of the Durand Line and a control over Afghanistan’s foreign policy,” Karzai said in his speech which was posted online. PHOTO: AFP

Scheduled to be sworn in as Afghanistan’s president on Monday, Dr Ashraf Ghani Ahmadzai will face multiple challenges as he prepares to lead a government of national unity. Among the many roadblocks which need to be surmounted is diffusing political tensions with Pakistan and building trust between the two countries.

Outgoing President Hamid Karzai did not spare his neighbours even in his farewell speech this week, further straining a fragile relationship and making the challenge greater for his successor. In an address to cabinet ministers and officials at the Presidential Palace, Karzai said he visited Pakistan on many occasions to find a solution for peace in the region, but the “efforts were in vain”.

“Pakistan always wanted two things from Afghanistan to which we never agreed—the recognition of the Durand Line and a control over Afghanistan’s foreign policy,” Karzai said in his speech which was posted online.

“We face common challenges and have to confront them through collaboration,” she said on Thursday during her weekly briefing when asked about the outgoing president’s statement. “There will be a new government in Afghanistan shortly and as I said earlier, we look forward to working closely with it.”

Analysts in Afghanistan say both countries will have to address each other’s concerns and remove suspicions for a tension-free relationship.

“There is a unique opportunity for both countries to engage in trust building and bring about real change in perspectives and policies,” former Afghan ambassador Omar Samad told The Express Tribune.

“On the other hand, Afghanistan will have to adopt a clear stance on addressing outstanding concerns to help it overcome suspicions,” said Samad, who is currently a senior Central Asia fellow at the New America Foundation.

He added Pakistan has to decide between friendship with Afghanistan and the use of non-state actors, such as the Taliban as proxies. “This will require a strategic rethink at the highest level,” he said.

Although Karzai and his close aides had always been critical of Pakistan, Dr Ghani’s team has a different approach and seeks improved bilateral ties. Abbas Noyan, spokesperson for the president-elect, said Ghani is determined to engage in constructive negotiations with his counterparts in Islamabad.

“Dr Ashraf Ghani and his team want a brotherly relationship with Pakistan and other neighbours,” Noyan told Voice of America on Thursday.

“The tension does not help us. We are looking to forging good ties [with Pakistan] and engaging in joint ventures and projects to help each other,” he said. Noyan added a strong and peaceful relationship will not only ease tensions and mistrust, but help Afghanistan and Pakistan use regional resources to make their economies independent of foreign financial assistance.

The spokesperson conveyed a clear message and underlined it was now up to Islamabad to bridge the trust gap and Kabul’s concerns over key issues, particularly the country’s role in reconciliation with the Taliban and alleged cross-border shelling.

Nazar Mutmaen, an Afghan columnist, said Ashraf Ghani would have to maintain cordial ties with Pakistan as the president-elect understands “he will face problems if relations deteriorate”.

“Dr Abdullah’s Northern Alliance has also improved its ties with Pakistan in recent years and there are hopes of better relations after Karzai,” Mutmaen told The Express Tribune.

The columnist, who regularly writes on the Taliban and militancy, disputed Karzai’s claim that Pakistan did not help in the peace process with the militants, adding the president himself was a major hurdle.

“Taliban never trusted Karzai as he had broken several pledges. His forces started bombing Taliban houses and arresting the organisation’s members in Kandahar despite agreeing they would not be touched if they lived in peace and agreed to vacate the city,” he recalled. The former president’s approach, he added, forced the Taliban to take up arms.

“Karzai begged some Kabul-based former senior Taliban leaders to help him establish telephonic contact with Mullah Omar, but all refused as they were of the firm belief the president had neither the power nor the sincerity for reconciliation,” said Mutmaen.

Pakistan admitted to its role of facilitating a Taliban office in Qatar last year, and that is the reason Afghan officials believe the country can play a role in dialogue. It is wrong to assume Pakistan wields enough control to force the Taliban to sit with the Afghan government, however, it can persuade the militant organisation that talks are the only way to find a solution.

Time is also ripe for the Taliban to review their stubborn approach and enter into a dialogue with Afghan authorities to end years of violence.

Afghanistan is posed to face serious security challenges after the withdrawal of foreign troops in three months and the country will urgently need peace with the Taliban to ward off instability. Intensification of war in post-Nato Afghanistan will have a direct impact on Pakistan, which is still fighting militants in North Waziristan, their biggest sanctuary. Both countries could end up being on the losing end if they indulge in their traditional blame game.