Ghani is to be inaugu­rated Monday as presid­ent; Abdull­ah will serve as chief execut­ive -- a new role simila­r to PM
By AFP
Published: September 25, 2014
Tweet Email 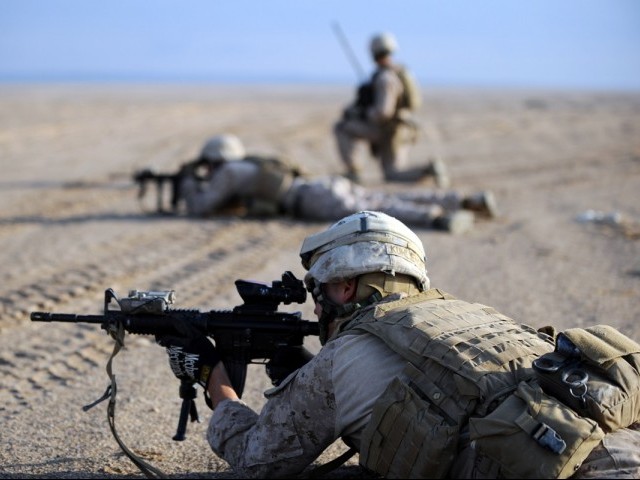 US troops in Afghanistan. PHOTO: AFP

NEW YORK: The United States (US) is preparing to sign a delayed security deal with Afghanistan within days of the inauguration next week of president-elect Ashraf Ghani, a US official revealed Wednesday.

The final results of the contentious elections will also be released by the Afghan elections commission shortly after Monday’s inauguration, which will hopefully “turn the page” on a turbulent few months.

“Everyone considers the Bilateral Security Agreement (BSA) closed in terms of the negotiation,” a senior State Department official said, referring to the bilateral security deal governing the presence of US troops in Afghanistan beyond 2014.

“No-one has talked about kind of reopening the issues or anything else within the BSA,” the official said.

“Given that there’s great consistency in terms of their commitment to do it and that it’s been fully negotiated and has closed, we expect that it will be fully signed in a matter of days after the new administration starts.”

After reaching a power-sharing accord for a unity government with his challenger Abdullah Abdullah, Ghani is to be inaugurated Monday as president. Abdullah will serve as chief executive — a new role similar to prime minister.

The State Department official, who asked not to be named, said there were “very good omens for how this will actually work.”

But he conceded the fragile Afghan government faced enormous challenges and Ghani and Abdullah would have to steer their teams towards working together.

“This has been a very adversarial, acrimonious elections process for going on almost a year, with particularly heightened tensions over the course of the last few months,” he told reporters.

“So to pivot fairly immediately from that adversarial relationship to one of collaboration is obviously going to take time.”

Afghan election officials on Sunday named Ghani as the winner, but declined to release the margin of victory or the turnout figure — triggering accusations of lack of transparency.

But the US official said he expected the results to be released by the electoral commission (IEC) once the government is up and running.

“There’s absolutely the intent that these results will be released by the IEC fairly soon. I think once a new government starts and it demonstrates that it can lead and provide the stability that Afghans are seeking, that there will be far more room for this,” the official said.

He denied that it had been a bid to hide the results, after both sides had accused the other of ballot-box stuffing.

“Given the kind of the very sensitive nature of the political environment at this time and the risk of strife… they wanted to ensure that the focus was really on this government of national unity.”