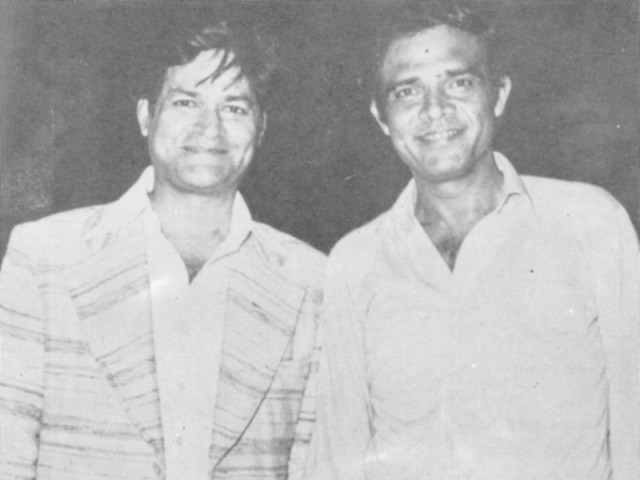 Pakistani music stalwarts Sohail Rana (L) and Ahmed Rushdi (R) weaved their magic for many Pakistani films. The picture, taken in the mid-1970s, features the maestros, who are reminiscent of the golden age of Pakistani film music.

Rushdi’s distinct, melodious and powerful voice eventually became the signature playback voice of Pakistan’s chocolate hero Waheed Murad. He is remembered by many as having lent voice to South Asia’s first-ever pop song Ko Ko Korina. Among his feats are songs such as Gol Gappay Wala and Akeley Na Jana from the film Armaan (1966), which rivet the attention of people till this day. Rushdi passed away in 1983 after suffering from a heart attack. “Today, I have lost my voice,” said Murad at the demise of Pakistan’s most famous playback singer. Twenty years later, he was awarded with Sitara-e-Imtiaz for his contributions to the field of music.

Sohail Rana was introduced to the Pakistani film industry by Murad and gained popularity when Rushdi began singing his compositions. Rana is the man behind numerous patriotic songs, including Sohni Dharti, Jeevay Jeevay Pakistan and Tera Pakistan Hai Yeh Hai Mera Pakistan Hai. He moved to Canada during the 1990s, where he opened an academy for aspiring musicians and continues to perform occasional shows for select audiences.