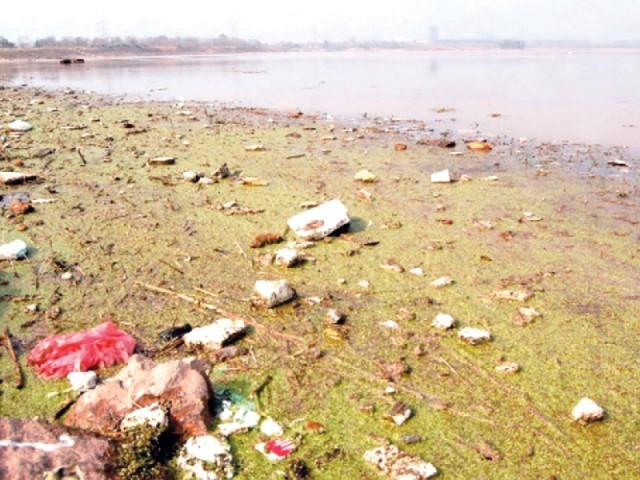 Delay in construction of four sewage treatment plants along with a sewage network in the catchment areas of the Rawal Lake has put the aqua life as well as the health of two million Rawalpindi residents in danger.

On the direction of the Supreme Court the Rawal Lake Monitoring Committee had tasked a private firm to identify the causes for pollution and propose treatment plants.

The consultancy firm, Usman and Company, had proposed four sites for construction of treatment plants in 2012 at an estimated cost of around Rs2.4 billion. The Islamabad Capital Territory Administration submitted PC-1 (project concept-1) to the finance ministry for final approval. The PC-1 ultimately reached the planning division, however, there has been no progress on the project since then, sources in the Environmental Protection Agency (EPA) told The Express Tribune requesting anonymity.

Environmentalists believe that the recent spell of rains brought with it silt along with solid waste from the catchment areas directly into Rawal Lake, which has not only reduced its storage capacity but also affected the quality of water.

“Years back Rawal Lake had the capacity to store 37,000 to 47,000 acre-feet water; its water was crystal clear but now its storage capacity has reduced due to the continuous flow of silt and other sewage into the lake and its colour has turned slightly brownish due to the influx of polluted material,” an official in the EPA said. However, the sources revealed that the residents have reopened the sewers that were plugged. Similarly, wastes from buffalo sheds thrown on the banks of the drains are still polluting the water. Other causes of pollution include waste from poultry farms situated on Murree hills, waste generated from Bari Imam Complex, Banigala and Quaid-i-Azam University. Similarly, with the passage of time the monitoring process has also slowed down as the Water and Sewerage Authority (WASA) of Rawalpindi had been submitting only once in two to three months, EPA sources said.

The apex court had directed Wasa to submit a report to the committee assuring that the water being provided to the inhabitants of the city and cantonment areas is fit for human consumption on a weekly basis. EPA sources further stated that the Punjab EPA has made headway in controlling pollution by filing cases against polluters particularly in the Murree Hills.

But so far no remarkable progress has been made at the federal level because of sluggish monitoring and ineffectiveness of the Environment Protection Tribunal which has not been functional for over a year. Environmentalists warned that the continuous flow of sewage into the lake could destroy aqua life as witnessed during 2002-03 when thousands of fish were found dead because of the polluted water.