Transitions: Remembering the man who dared to speak his mind

Transitions: Remembering the man who dared to speak his mind

Dr Shakil Auj stood out in his suit and tie at the KU Islami­c Studie­s, where profes­sors wore shalwa­r kameez and topi.
By Faiza Rahman
Published: September 20, 2014
Tweet Email 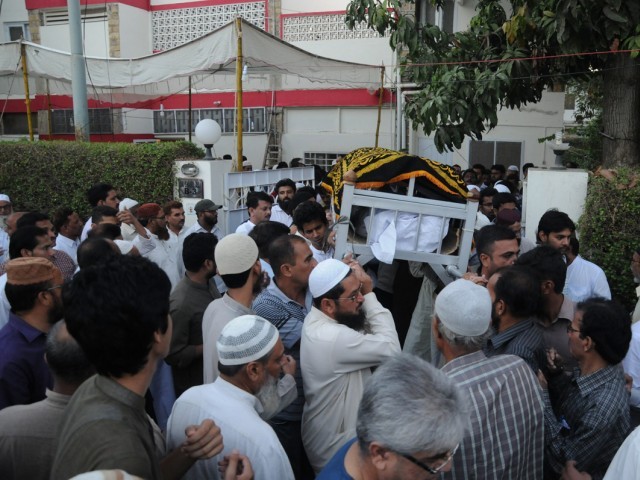 KARACHI: I reached the University of Karachi’s Islamic Studies department on a Friday morning to meet Dr Shakil Auj, the dean of the Islamic studies faculty. I had a few questions to ask him for a report.

I had known him from before, but had never visited his office. The absence of protocol startled me. Usually outside deans’ offices, there is a secretary or two, who might glare at you in annoyance, ask you gruffly if you had an appointment, and call the busy professor inside on the extension phone to check your veracity.

Nothing here. I wandered in unsurely through the door which stood ajar. Dr Auj was unassumingly cordial. Most of the male professors in this department wore shalwar kameez, a topi and sported a long beard. Dr Shakil wore a suit with a tie.

“Aaj kal ke bachon ki tarha mein bhi shayad liberal hi hoon [Perhaps I am also liberal like the kids these days],” he said, breaking the ice. Some other students sitting in the office chuckled.

We talked about how the Islamic Studies syllabus had – or hadn’t – evolved over the years. We talked about how only some versions of religion are systematically pruned out, a practice that made for the well-spring of extremism. The questions I asked probably sounded very naïve to him. But not once did I feel patronised.

Indeed, I am in no position to pronounce a verdict on Dr Auj’s scholastic calibre for I have neither the requisite academic training to do so nor the sufficient exposure to his classroom skills. But I’ll say this: he surely knew how to put up a fight.

He had borne the most intimidating consequences for trying to make the syllabus more progressive. The messages, the threats, the rumours, the murmurs – those were fruits of his struggle. Or were they a direct result of his equal regard and respect for other interpretations of faith? I forgot to ask him that.

One usually can’t stop arguing with people who have grown old among books, people like Dr Auj, who was conferred a DLitt degree – the highest of academic honours, a notch above even the PhD. Such people, who might have spent tedious years looking up an obscure source in books, come with a certain common characteristic: they are patient and humble enough to listen to a person much, much younger than them offer half-baked opinions on matters they themselves have spent a lifetime studying. They correct you with a gentleness that betrays a deep respect for young, questioning minds. These are the people who, quite subconsciously, train us both intellectually and socially.

Back in 2013, sitting in his office, he told me about the death threats. He told me how some students visibly cringed at some of his views in class. He spoke of the fabricated charges of plagiarism heaped on him, of people in the department who made no secret of their hatred for him, of the blasphemy charge filed against him, the abusive text messages and shameful slander. “Most of my students know all this, you can ask them – but don’t write this in your newspaper because it will make matters worse for me.”

I didn’t then, but I wish I had. Perhaps it would have improved matters. Everyone, from students in the department to the university’s vice chancellor and the police, was well-aware of the icy-cold atmosphere within the department. Why wasn’t there an inquiry? Why wasn’t anyone deposed? I am a mere outsider to the grief of Dr Auj’s loss. If these matters are so sickening to me, one can only wonder at the trauma that his students and family might be undergoing.

May his soul rest in peace.

Education and the gender gap: Female literacy rate in villages is near zero, says Gazdar