Stay or go? Scotland votes on independence from Britain

Stay or go? Scotland votes on independence from Britain

While the outcom­e looks too close to call, the pro-indepe­ndence camp has seen suppor­t surge in recent weeks
By AFP
Published: September 18, 2014
Tweet Email 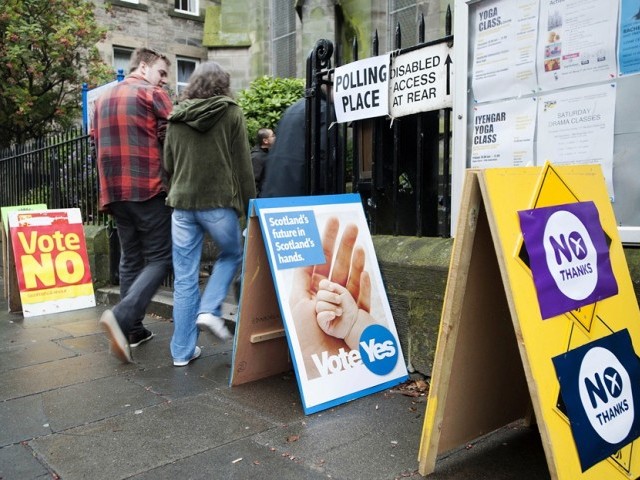 Pro-independence and pro-union literature surrounds a polling station in the south of Edinburgh, Scotland, on September 18, 2014, during a referendum on Scottish independence. PHOTO: AFP

EDINBURGH: Scotland began voting Thursday on whether to become independent from Britain in a referendum which has electrified the nation, dominating debate in homes and pubs from Edinburgh to the Highlands.

While the outcome looks too close to call, the pro-independence camp has seen support surge in recent weeks as the “No” side’s long-term lead in the opinion polls shrivelled away.

According to a report by The Guardian, the campaign against Scottish independence appears to have edged ahead in the final poll of the referendum campaign, with the “No” campaign at 53% of decided voters compared with the “Yes” group’s 47%.

“This is our opportunity of a lifetime,” Scotland’s pro-independence First Minister Alex Salmond told a cheering crowd of supporters in Perth at a final rally on Wednesday.

“It’s the greatest, most empowering moment that any of us will ever have,” he said, as supporters waved Scottish flags and chanted “Yes we can!”

British Prime Minister David Cameron has pleaded with Scots to vote in favour of staying in “our home” and has warned that the break-up would be a “painful divorce” full of economic uncertainty.

If Scots vote “Yes”, it would end a union dating back to 1707, could force Cameron to resign and might raise serious questions about Britain’s status on the international stage.

It is being closely watched in other parts of the world with strong separatist movements, particularly in the Spanish region of Catalonia where many are now also clamouring for a vote.

World financial markets have been volatile for days on uncertainty over the outcome.

And US President Barack Obama, leader of Britain’s closest ally, weighed in on Wednesday saying he hoped the UK would remain “strong, robust, united”.

A record turnout of around 80 percent is expected in the referendum after 97 percent of people eligible to vote registered, almost 4.3 million people.

Polling stations close at 2100 GMT and results are likely to emerge in the early hours of Friday.

At a polling station in Edinburgh West, one of 2,600 places where votes will be cast across the country, people arrived almost as soon as the booths opened at 0600 GMT.

From the windows of people’s homes to stands on street corners, lapel badges and even cupcakes, support for the “Yes” campaign has been more visible than for “No” in many parts of Scotland.

As “Yes” supporters gathered in Glasgow’s main square Wednesday, 62-year-old Frank Evans said: “I’ve been ruled by Westminster governments for too long. This is a chance to rule ourselves, for my daughter and my grandson.”

But the “No” camp insists that many voters opposed to independence have simply not made their voices heard yet.

“The silent majority will be silent no more,” said Britain’s former prime minister Gordon Brown in a passionate appeal to a Glasgow rally. “We will not have this.”

In the oil city of Aberdeen, “No” campaigner Andy Harrold admitted their side had been slow to get started and had not spent money on “razzmatazz”.

“I’m here to save my country,” he added. “There have been too many indecisive statements from Salmond, he hasn’t come out with anything concrete about what’s happening.”

With opinion polls suggesting only a few points between the “Yes” and the “No” camps, undecided voters are likely to be crucial.

“I’m going to be reading up on it tonight. I’m going to be looking at what side makes the better argument, whether I can believe one side,” said Steven Andrew in Scotland’s capital, Edinburgh.

Debate in the campaign has focused on the economy, including what currency an independent Scotland would use and whether its North Sea oil wealth would help make it a richer nation.

Questions over whether an independent Scotland could be a member of the European Union and how long this would take to negotiate have also surfaced repeatedly.

Scotland’s Parliament, opened in 1999, holds some powers devolved from Westminster to set policy in certain areas of domestic policy, such as health and education.

Even if there is a “No” vote, Scotland is set to be handed new authority over areas like tax and welfare, which Brown says could amount to effective home rule.

But a detailed timetable for this only emerged late in the campaign after Brown effectively stepped in to take control of the “No” camp as opinion polls started to suggest “Yes” could win.

“The status quo is gone,” Cameron said on Monday in his final Scottish speech of the campaign. “There is no going back to the way things were. A vote for ‘No’ means real change.”

Britain’s leader, deeply unpopular in Scotland, has faced criticism for not taking the prospect of Scottish independence seriously enough sooner.

He is likely to face pressure from his Conservative party to step down if there is a “Yes” and would come out badly bruised even in case of a narrow “No” victory.

Whatever the outcome of the vote, many commentators have praised the high level of political involvement shown in the campaign.

“It’s an event that has energized the interest in Scotland like nothing else in politics,” said Magnus Gardham, political editor of the Scottish newspaper The Herald.

“The stakes are extremely high.”