British PM heads to Scotland hoping to boost 'No' vote

British PM heads to Scotland hoping to boost 'No' vote

'Yes' and 'No' camps are racing to win over undeci­ded voters ahead of histor­ic poll on Scotti­sh indepe­ndence on Sep 18
By AFP
Published: September 15, 2014
Tweet Email 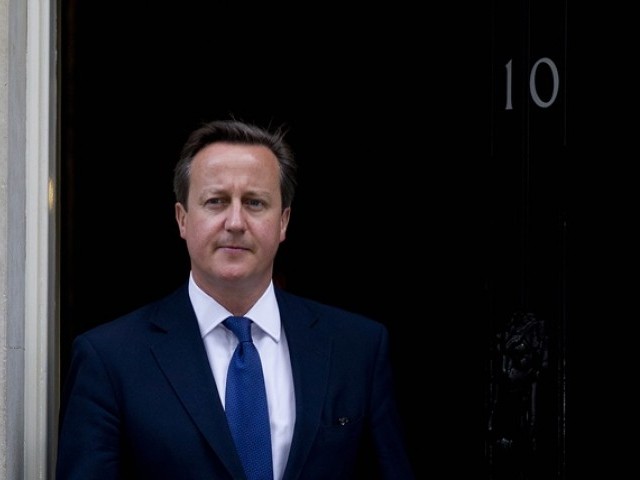 EDINBURGH: British Prime Minister David Cameron on Monday makes his last visit to Scotland ahead of this week’s independence referendum, hoping to boost the “No” vote, with polls predicting a very tight race.

The “Yes” and “No” camps are racing to win over undecided voters ahead of the historic poll on Scottish independence on Thursday, with top bands playing a gig urging a vote for leaving Britain.

Meanwhile, Queen Elizabeth II reportedly made her first comment on the referendum.

British media said the 88-year-old monarch told an onlooker after attending church near her Balmoral estate in the Scottish Highlands on Sunday: “Well, I hope people will think very carefully about the future.”

As Scotland enters the most decisive week in its recent political history, opinion polls suggest the outcome of Thursday’s referendum will be extremely close.

A poll by Panelbase for the Sunday Times, with the undecideds taken out, gave “No” the slimmest of margins with 50.6% to 49.4%.

An ICM online poll for the Sunday Telegraph meanwhile gave the nationalists 49%, ahead of the pro-UK camp at 42% with 9.0% undecided, although pollsters warned the sample size could be too small to be representative.

“The polls show that the referendum is on a knife-edge. There is everything to play for,” said Blair Jenkins, chief executive of the “Yes Scotland” campaign.

Hopes were high among “Yes” supporters as some of the biggest names in Scottish rock took to the stage in Edinburgh Sunday urging people to vote for independence.

Calum Forbes, a 22-year-old recent graduate and “Yes” supporter, said beforehand: “People are excited. The ‘Yes’ camp I feel are more invigorated but I’m personally terrified of being complacent.”

While politicians battle to firm up their side of the vote, the thoughts of others are turning to the wider impact the referendum could have on Scottish society.

The Church of Scotland’s moderator John Chalmers urged Scots to “live in harmony with one another” whatever the result.

The Church of Scotland, the country’s biggest religious group, is holding a service of reconciliation in Edinburgh next Sunday following the vote and has urged politicians from all sides to attend.

After media reports suggesting the queen was worried over a possible “Yes” vote, Buckingham Palace said last week: “Any suggestion that the queen would wish to influence the outcome of the current referendum campaign is categorically wrong.”

The queen’s constitutional position means that she must remain above politics.

First Minister Alex Salmond wants her to be queen of Scotland if the country does vote for independence.

But if that does happen, it would tear up the Acts of Union which brought together the kingdoms of England and Scotland in 1707.

It could also have a major impact on Britain’s standing in the international community and threaten the position of Cameron.

Earlier in the campaign the British prime minister largely left the tub-thumping visits to Scotland to others, aware that neither he nor his Conservative party, which holds just one parliamentary seat in Scotland, command much affection north of the border.

But as the referendum campaign reaches its climax, and with the result impossible to call, he has taken on a more direct role in the hearts-and-minds debate over Scotland’s future.

Salmond’s “Yes” campaign had one of its busiest days yet Sunday, with canvassers out on the streets in force and young people encouraged to visit their grandparents to persuade them to vote for independence.

“We’re aiming to achieve a substantial majority,” Salmond told BBC television. “This is a once in a generation opportunity.”

“This is going to go down to the wire but I think we will win because I don’t think Scotland is going to get bullied into accepting something that it doesn’t want,” he said.

The “Yes” side got a boost when Nobel Prize-winning economist Joseph Stiglitz said there was “little basis for any of the forms of fear-mongering” over its economic future.

This is contrary to the view of fellow Nobel economics laureate Paul Krugman, who has said Scots should “be very afraid” of independence.