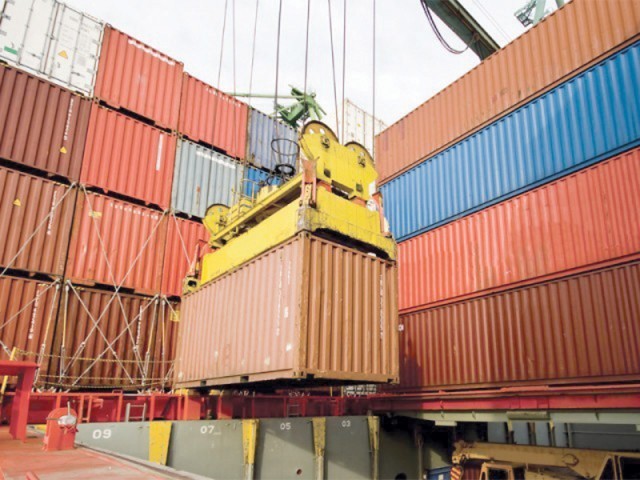 Pakistan’s exports as a fraction of the GDP tend to go down over time despite the fact that there has been a massive expansion in global trade in the last 20 years. PHOTO: STOCK IMAGE

Almost all economic turnarounds in the recent past have primarily been exports-led. From China to India, a rising share of exports as a fraction of the gross domestic product (GDP) has been a key feature of every economic success story in recent decades.

But global trade data suggests Pakistan fares poorly compared to regional economies when it comes to the competitiveness of its exports in the international market.

The gap appears starker when the growth rate of Pakistan’s exports is compared with that of India. According to the World Trade Organization (WTO), Pakistan’s exports grew at an average rate of 7.7% per annum between 2003 and 2013. In contrast, the annual increase in the value of India’s exports during the same 10-year period remained 18.9%.

According to economist Atif Mian, the performance of India and Pakistan looked fairly similar until 1992. But data from 1992 onwards shows a great divergence between the two countries in terms of their exports’ competitiveness, he added.

“Since 1993, Indian and Bangladeshi exports per capita have grown 5.8 and 3.8 times higher than that of Pakistan, respectively. These are enormous differences in growth,” Mian told The Express Tribune in an interview.

The International Monetary Fund (IMF) has recently named Mian, professor of economics at Princeton University, among 25 economists under 45 ‘who are shaping the way we think about the global economy’.

“If Pakistan continues to fall behind at such a pace for another generation, my fear is that it might become a regional economic ghetto. The government needs to wake up,” he noted.

Many people argue that the widening difference in the exports per capita of India and Pakistan is a direct consequence of the economic liberalisation programme that India went through post-1992 under former finance minister Manmohan Singh.

But Mian believes this explanation is flawed. He says Pakistan had a more liberalised economy – and much earlier – than India. However, Pakistan’s exports per capita never saw that kind of a sudden increase, he adds.

Moreover, Pakistan’s exports as a fraction of the GDP tend to go down over time despite the fact that there has been a massive expansion in global trade in the last 20 years.

Mian believes boosting domestic productive capacity is the biggest challenge that Pakistan is facing today. Low exports mean the economy is struggling to produce products that are competitive in the global market, he says.

And the reason for Pakistan’s inability to compete in international trade is its lack of sound institutions, he says. “Just like individuals cannot grow and prosper without a good work ethic, countries cannot grow without good institutional foundations,” he noted.