Appeal to Islama­bad to open LoC for relief goods
By Our Correspondent
Published: September 14, 2014
Tweet Email 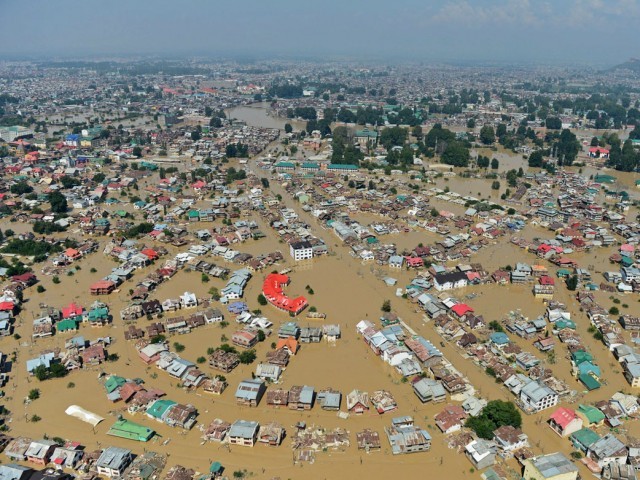 Kashmiri houseboats and houses submerged by floodwater are seen from an Indian Air Force helicopter during rescue and relief operations in Dal Lake in Srinagar on September 10, 2014. PHOTO: AFP

Azad Jammu and Kashmir International Forum for Justice and Human Rights (IFJHR) on Saturday appealed to the world community to help in providing relief to waterlogged Srinagar city in Indian-held Kashmir where hundreds of thousands people are affected by the torrential rains and floods.

“We appeal to the International community particularly the United Nations and European Union (EU) to send their aid bodies for the help of thousands people trapped in flood water in the various localities of  Srinagar,” said Raja Sajjad, adviser to the AJK president.

He was addressing a demonstration attended by the representatives of different political parties of Azad Jammu and Kashmir (AJK) and human rights organisations.

The demonstrators were holding banners and placards inscribed with slogans like ‘save the flood victims of Srinagar’ and ‘send international NGOs to flood affected areas of held Kashmir Valley’.

He said up to two stories of residential houses are in water in occupied Kashmir and people are without food and clean drinking water for the last eight days.

Whereas Media Adviser to Prime Minister of Azad Jammu and Kashmir Shaukat Javid Mir announced that the government of AJK will cut its development budget for the relief and rescue of the waterlogged Kashmiris in Srinagar.

“Although the flood has hit various districts of Azad Kashmir, we are also committed to our brethren across the Line of Control in Kashmir Valley and some other affected parts of Jammu region,” he added.

Head of IFJHR Azad Jammu and Kashmir chapter Nisar Ahmad Khan said the Indian media is showing the alarming stance of Indian military, who are evacuating non-locals, tourists and Hindus while Muslim flood-victims were bypassed by the Indian Army, Navy and Indian Air Force teams.

Addressing the government of Pakistan, Nisar said they need to put pressure on India to allow the foreign aid workers to start their operation in Srinagar. “As per reports, the damage is more than the dreadful earthquake of 2005,” he added.

Addressing the Muzaffarabad journalists on telephone from Srinagar, All Parties Hurriyat Conference (APHC) Chairman Syed Ali Shah Geelani said more than one million people of Kashmir have been directly affected by the flood in southern Kashmir and parts of Jammu.

He said they had contacted the Red Cross in New Delhi to start a rescue and relief operation in Srinagar and other damaged areas, but quoted Red Cross that New Delhi was not giving them permission to establish flood relief camps in the valley.