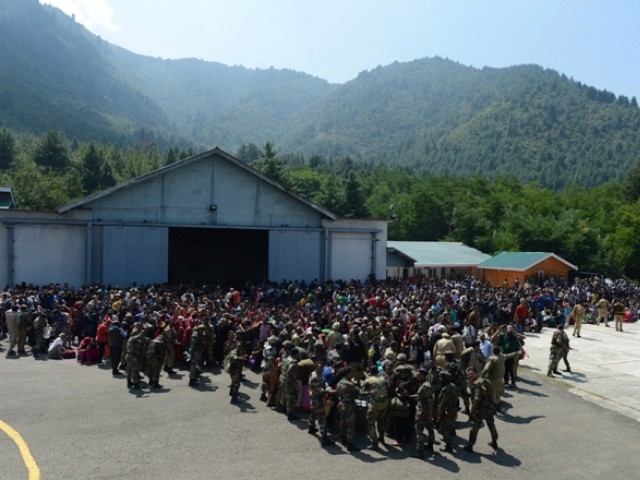 Tourists wait to be evacuated by Indian Air Force helicopters during rescue and relief operations following flooding in Srinagar on September 10, 2014. PHOTO: AFP

Srinagar has ‘drowned completely’ under floodwaters, a senior official said on Friday, as rescuers raced to help communities hit by landslides in Indian Kashmir. Thousands were stranded, homeless and hungry in the region’s capital following the region’s worst flooding in 50 years.

“Srinagar has drowned completely, it’s unrecognisable. Almost everything is in ruins, it is just unimaginable,” Mehrajuddin Shah, State Disaster Response Force chief of Indian Kashmir, said. According to him, work to rescue people was ‘in full swing’.

“But even now, around 100,000 people are believed to be stranded in different places,” he added.

“Almost every second family has one or two missing members,” said Syed Munir Quadri, who has been looking for his father for three days in Srinagar.

All but one of Srinagar’s major hospitals were under water, and six infants died in a maternity hospital due to a lack of medical care, a rescuer said, and telecommunication links to the city have been down for days.

The ferocity of the floods appeared to have caught the administration in Indian Kashmir by surprise and has prompted an outpouring of anger in the Muslim-majority region. Srinagar resident Munir Ahmad complained he and his brother were trapped for two days before being rescued by a local boat.

Further south, 40 people were killed by a landslide in a village. “The entire village slid down in a matter of minutes, burying all houses under tons of rock and mud. The villagers had no time to run to safety,” the CNN-IBN TV channel said on its news website.

In New Delhi, Home Minister Rajnath Singh said about 200 Indians had been killed and around 130,000 rescued.