British leaders to defend 'family of nations' in Scotland

British leaders to defend 'family of nations' in Scotland 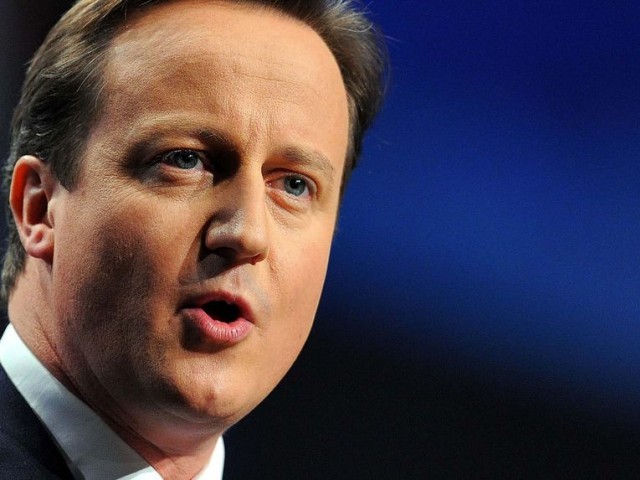 LONDON: British Prime Minister David Cameron warned Scottish voters that independence would be a “leap into the dark” on Wednesday as the leaders of all three parties headed north in an urgent bid to head off surging support for a split.

With only eight days to go before Scotland votes on whether to end the 300-year-old union, Cameron and opposition Labour leader Ed Miliband agreed to skip their weekly debate in the House of Commons and travel north of the border.

The sudden move, announced only a day earlier, reflects a new sense of urgency in the unionist camp after recent polls showed the two sides of the debate were now neck-and-neck.

“The United Kingdom is a precious and special country,” Cameron wrote in Wednesday’s Daily Mail newspaper.

“So let no one in Scotland be in any doubt: we desperately want you to stay; we do not want this family of nations to be ripped apart.

“If the UK breaks apart, it breaks apart forever. So the choice for you is clear: a leap into the dark with a Yes vote, or a brighter future for Scotland by voting No. You can have the best of both worlds in the UK.”

Just a few weeks ago, there had been little concern in Westminster about the referendum on September 18, with polls consistently showing an easy victory for the unionists.

But a YouGov poll at the weekend set the cat among the pigeons, putting the pro-independence “Yes” camp ahead for the first time, while another on Tuesday showed the two sides were tied.

In response, all three major parties unveiled a timetable for the transfer of new powers over income tax and welfare spending to the devolved Scottish government, and said work would begin immediately after a “No” vote.

First Minister Alex Salmond, the leader of the Scottish National Party (SNP), dismissed the initiative as a “back-of-an-envelope non-plan”.

He said the “extraordinary, last-minute” trip by Cameron, Miliband and Clegg would not help their cause.

“The ‘No’ campaign think that they are losing this campaign – and these hugely distrusted Westminster leaders trooping up to Scotland is only going to boost that process,” he said.

Cameron’s Conservatives are not popular in Scotland – they have just one Scottish member of parliament out of 59 and he is trusted by just 23 percent of Scots, according to a recent YouGov poll.

Miliband’s Labour party has a stronger presence in Scotland, but he has the same dismal personal rating.

“The message of this extraordinary, last minute reaction is that the Westminster elite are in a state of absolute panic as the ground in Scotland shifts under their feet,” Salmond said.

The YouGov poll on Sunday put the “Yes” camp ahead by two points, a major development given that the same polling company put them 22 points behind one month earlier.

Another poll on Tuesday by TNS Scotland confirmed the two sides were neck and neck, with respondents who said they were certain to vote evenly split at 41 percent.

Cameron had been taking a back seat but the polls have changed the political landscape, prompting a rare show of unity with his rivals — although they are not expected to share a platform when in Scotland.

The blue and white Scottish saltire flag was hoisted over Cameron’s Downing Street office on Tuesday, as Miliband urged public buildings across Britain to fly the standard to send a message to Scots to “stay with us”.

The latest polls sent the pound tumbling to a 10-month low against the dollar, amid continued uncertainty about the effect that independence would have on the British economy.

The SNP says Scotland would keep the pound, but the unionist parties in London argue this will not be possible – a view reinforced by the governor of the Bank of England.

“A currency union is incompatible with sovereignty,” Mark Carney told a meeting of trade unions in Liverpool, northwest England, on Tuesday.