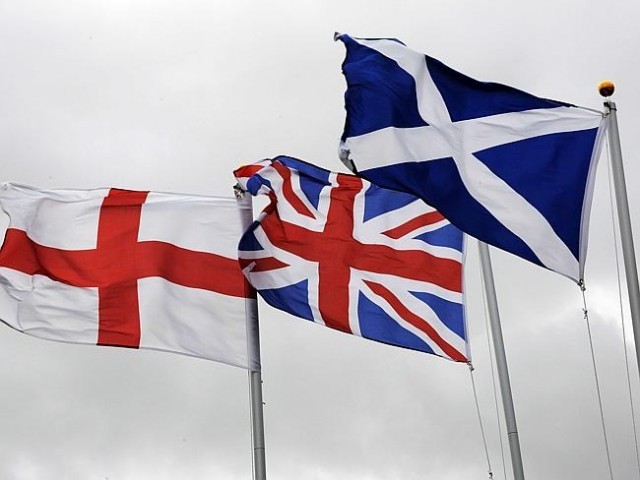 The UK flag could change if Scotland votes for independence. PHOTO: AFP

LONDON: The British government scrambled Sunday to pledge greater autonomy for Scotland, after a poll put the pro-independence camp ahead just 11 days before the referendum on separation.

Finance Minister George Osborne said greater tax and spending powers would be announced in the coming days and would be implemented if Scotland votes on September 18 to remain in the 300-year-old union with England.

The government’s offer came after a YouGov poll published in The Sunday Times newspaper gave the “Yes” camp 51 percent support compared to the “No” camp’s 49 percent, excluding undecided voters. Six percent said they had not made up their minds.

Although the two-point lead is within the margin of error, the findings dramatically up the stakes ahead of the vote, giving momentum to Scottish First Minister Alex Salmond and his separatist Scottish National Party (SNP).

“If people were in any doubt that they can stay at home, that they don’t need to go out to the polls and vote ‘No’ to avoid separation, they won’t be in that doubt today.

“They should also be in no doubt about the consequences of this decision,” the chancellor of the exchequer added.

“No ifs, no buts: we will not share the pound if Scotland separates from the rest of the UK.”

He said sharing the currency after independence would be equivalent to a couple divorcing but keeping a joint bank account.

Salmond says he would refuse to take on Scotland’s share of the United Kingdom’s debt post-independence if he does not get his way on a euro-style cross-border currency union.

Osborne said it was “clear” that Scots wanted greater autonomy and the three main United Kingdom-wide parties – the Conservatives, their Liberal Democrat junior partners in government and the Labour opposition – had agreed to “deliver” on that.

“You will see in the next few days a plan of action to give more powers to Scotland. More tax powers, more spending powers, more plans for powers over the welfare state,” he said.

“Then Scotland will have the best of both worlds.

“They will both avoid the risks of separation but have more control over their own destiny, which is where I think many Scots want to be.”

Any vote for Scotland to leave the UK would raise questions about Britain’s standing in the international community and could put pressure on British Prime Minister David Cameron to stand down.

Scotland represents one-third of Britain’s landmass and is home to Britain’s submarine-based Trident nuclear deterrent, which the SNP says must be out of an independent Scotland by 2020.

The Better Together campaign, which backs Scotland staying in Britain, has been ahead in opinion polls for months but its lead has narrowed in recent days.

The “No” camp had a 22-point lead in YouGov polling just one month ago. Another YouGov survey for The Times newspaper on Tuesday showed a marked narrowing of the gap to six points.

Osborne’s predecessor Alistair Darling, leader of the Better Together campaign, said the latest poll showed the referendum “will go down to the wire”.

“We relish this battle,” he added. “It is not the Battle of Britain – it is the battle for Scotland, for Scotland’s children and grandchildren and the generations to come. This is a battle we will win.”

Scotland’s SNP Deputy First Minister Nicola Sturgeon called the poll findings “exceptionally positive” but added that the “Yes” campaign “still has a lot of work to do to win”.

The YouGov/Sunday Times poll also showed that pro-union campaigners such as Darling and Cameron were trusted less than Salmond.

A second survey commissioned by the “Yes” camp and released on Sunday puts the “No” camp four points ahead. The Panelbase poll gives “No” 52 percent and “Yes” 48 percent, excluding those who have not decided yet.

Gordon Brown, Cameron’s Labour predecessor as prime minister, and a Scot, blamed Conservative policies for hindering support for the union.

But he said whatever government was “temporarily” in power – a UK-wider general election is due in May – that should not be a basis for an “irreversible decision”.

“Nobody should ever be complacent,” Brown told Sky News television about the polls.

“The underlying mood of the electorate voting in this referendum is they want change,” he said, but stressed the best way to get it was through greater autonomy rather than breaking “every single link” with the rest of the UK.