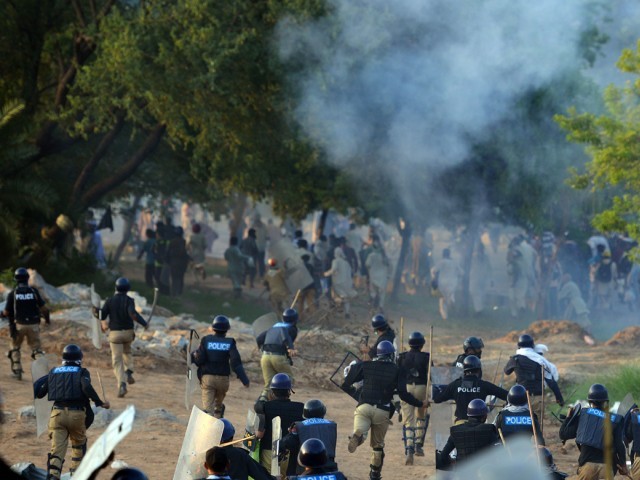 Experts hold TV channels responsible for exacerbating the situation by flashing and airing live coverage of protests and clashes between the protesters and the security personnel..PHOTO: AFP

ISLAMABAD: The ongoing sit-ins and protests by the Pakistan Tehreek-e-Insaf (PTI) and the Pakistan Awami Tehreek (PAT) have taken toll on the capital’s residents with a surge of 20 to 30 per cent in cases of anxiety, stress, depression and other mental ailments.

Experts hold TV channels responsible for exacerbating the situation by flashing and airing live coverage of protests and clashes between the protesters and the security personnel.

Pakistan Institute of Medical Sciences Psychiatry Department head Prof Rizwan Taj says majority of the patients, who have visited him since August 12, had the feelings of insecurity and uncertainty.

“Majority of them say that they feel insecure to go out of their homes under the current circumstances as most of them fear for being targeted.

Prof Taj says that almost all the roads in the capital have been blocked, which has disturbed the routine life.

When they venture out, all they see are shipping containers and security personnel giving the impression that the city has turned into a war zone, he adds.

“They remain restricted to their homes and are unable to go to offices, relatives, recreation places for almost 20 days now, only watching live coverage of protests and clashes.”

This gives the impression that the situation is deteriorating with each passing day, says Prof Taj.

“Live coverage of clashes and reports of deaths on various TV channels turn out to be a disaster for many people,” he says.

Prof Taj says that many people also have to face huge financial losses due to the closure of their businesses for weeks.

National Engineering and Scientific Commission (Nescom) Hospital Psychiatry Department head Dr Shahid Ali Khan says that the number of patients visiting him has increased from 10 to 60 in the last 15 days and majority of them have suffered from depression and mental illness.

“Almost 80 per cent of the patients talk about the protest rallies, sit-ins and their consequences,” he says adding that the residents living near the Red Zone have suffered the most.

While talking about one of his patients, who lives on Embassy Road in G-6, the doctor says that she was already an anxiety patient but the current political situation has further aggravated her condition.

“Constant speeches by PTI and PAT leaders and ‘playing of  songs’ have given her sleepless nights prompting her to double her medicine dose,” says Dr Khan.

A psychiatrist, who is working at the Pakistan Institute of Medical Sciences (Pims), says that not only the residents have suffered from depression and anxiety but the medical staff and police personnel have also been facing the brunt.

“The police personnel are not allowed to go on leave while hospitals are on red alerts, and the whole staff is on their toes round-the-clock to deal with any untoward situation,” said the psychiatrist.

A belated move: Environment tribunal gets chairperson, after 18 months