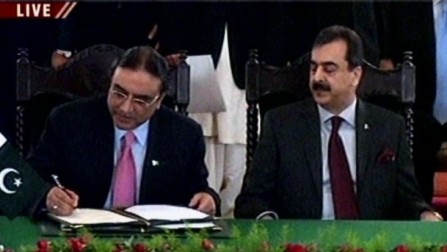 ISLAMABAD: President Asif Ali Zardari signed the 18th constitutional amendment bill into law amidst a roaring crowd of PPP’s supporters  in the Presidency on Monday. Witness the signing here.

President Zardari became the first the president to forgo his executive powers and thanked parliamentarians and all coalition partners for forging harmony to make it a success.

Speaking at the signing ceremony, President Zardari said this historical event stands testimony to the fact that all political parties are united on national issues.

The president also saved the opportunity to highlight other achievements of the democratic government as NFC Award; Gilgit Baltistan elections and Aghaze Haqooq-e-Balochsitan Package. He said the bill marks an important milestone in the struggle of people on the road to democracy.