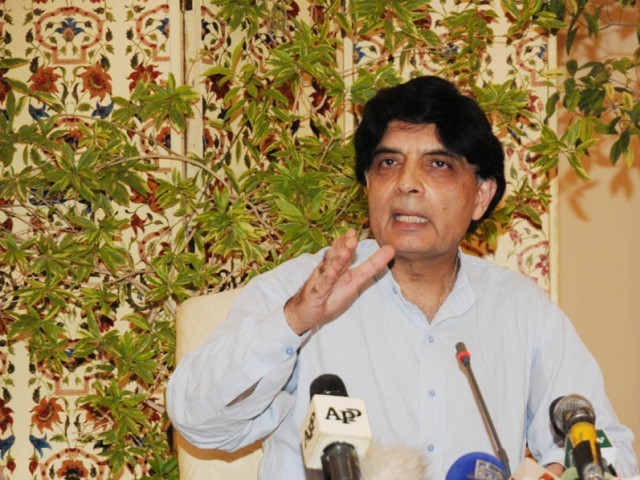 The chief military spokesperson said on Friday that the government had asked Chief of the Army Staff General Raheel Sharif to ‘facilitate’ the resolution of the political imbroglio. Soon after, the interior minister explained how the government had requested a ‘facilitative role’ for the army chief, while ruling out any ‘mediatory’ or ‘guarantor’ role in the impasse, as was earlier claimed by Pakistan Awami Tehreek (PAT) leader Dr Tahirul Qadri.

“[The] COAS was asked by the govt to play a ‘facilitative’ role for [the] resolution of [the] current impasse, in yesterday’s meeting, at #PM House” Maj-Gen Asim Saleem Bajwa, the director general of the Inter-Services Public Relations (ISPR), said in a tweet on the micro-blogging website Twitter.

Soon after the military spokesperson’s statement, Interior Minister Chaudhry Nisar Ali Khan told a news conference that the army chief acted at the government’s behest to end the political crisis created by the prolonged protest sit-ins of Pakistan Tehreek-e-Insaf (PTI) and PAT. He was referring to Thursday night’s meetings of the army chief with Dr Tahirul Qadri and Imran Khan.

The interactions came hours after Chaudhry Nisar said in a statement that the government had asked the army chief to play his role to end the crisis. The decision, according to the interior minister, was taken at a meeting between the army chief and Prime Minister Nawaz Sharif.

“During yesterday’s meeting [at the Prime Minister House] it was decided that the army chief may interact with them [Qadri and Imran]. But his role will be that of a facilitator, not a mediator or guarantor as some people are trying to interpret it,” Nisar said at Friday’s news conference.

“The government has given the army permission for whatever facilitation it has been playing. It [the role] should not be treated more than this,” he added.

The interior minister claimed that the role given to the army was in accordance with the Constitution. However, he did not quote any constitutional provision to substantiate his claim. “There are many examples in the past when the army was asked to perform something that does not directly come under its domain,” he said.

Nisar claimed that the government had sought the army’s facilitation upon the suggestion of “some interlocutors, both political and non-political”. He didn’t name anyone, though.

The minister said he didn’t say that he had received any request directly from the leaders of the two protesting parties for meetings with the army chief. To substantiate his claim, he read out parts of a speech he made on the floor of the National Assembly earlier in the day where he said that the government had asked the army chief to play a facilitative role for ending the prevailing crisis.

The interior minister also claimed that the statement issued by the ISPR was sent him for clearance before it was released to the general public.

The government’s decision to seek out the role of the army came under scathing criticism from allied and opposition parties in parliament. Opposition leader in the National Assembly Syed Khursheed Shah and Mehmood Khan Achakzai, whose Pashtoonkhwa Milli Awami Party is a coalition partner of the PML-N government, hit out at the government in their fiery speeches.

In a brief speech on the floor of the house, Premier Nawaz said that the PAT and PTI leaderships had requested for meetings with army chief Gen Raheel Sharif. He told the lawmakers that the interior minister asked him that Imran and Qadri wanted to meet the army chief and he [Nawaz] immediately granted the request.

“Nisar got a call from Imran Khan and Tahirul Qadri in my presence. He [Nisar] said they want to meet the army chief. I immediately said if they want to meet him, let them meet,” the premier said. He added that even if he had not asked it, the army would have played its role since the military was already deputed in the federal capital. “If the protesters tried to storm any government building, the army would have taken action,” he added.

Soon after the speeches of the premier and the interior minister, the PAT chief emerged from his shipping container to refute these claims.