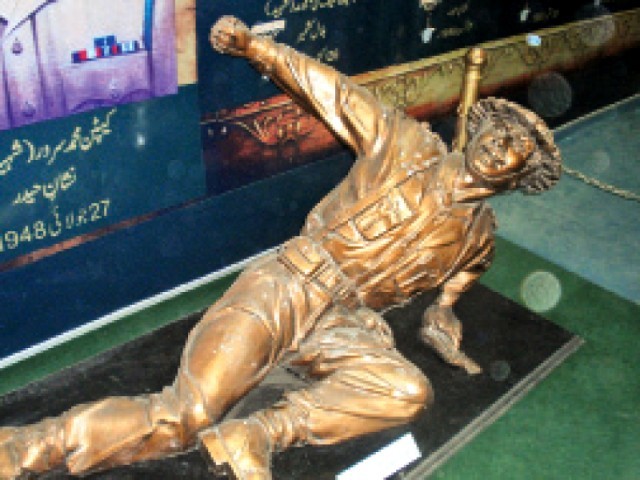 Crowds turned up en masse in Sukkur to see the Azadi Train, which carries replicas of national monuments such as the Mazar-e-Quaid, Bab-e-Khyber and the Ziarat residency, along with photographs and sculptures of national heroes and symbols of the country’s diverse cultures. PHOTO: EXPRESS

The Azadi Train pulled in at the railway station in Sukkur on Wednesday night, bearing replicas of national monuments, symbols of the diverse cultures of the country’s provinces, and a photographic gallery of Pakistan’s past on board.

Large crowds, including women and children, rushed to the station to welcome the train, which was especially prepared to tell people about the making of the country. It carries replicas of monuments, such as the Mazar-e-Quaid, the Shahi Fort, Bab-e-Khyber and Ziarat Residency. There is also a photo gallery portraying the struggle for Pakistan, the nation’s martyrs and its military paraphernalia.

“My children had never seen such things before and they are completely transported by the Azadi Train,” said a young mother, who had brought her two children to see it. “As a matter of fact, some of these things, such as the photos of the heroes who made countless sacrifices in the effort to create Pakistan, are new even to me.” She added that the train was like a flashback through history.

People took great interest in the replicas of the monuments, with many taking pictures of them with their families. “Our younger generations know very little about the hardships people faced during the creation of Pakistan,” said a man visiting the gallery with his family. “Pakistan Railways has done a great job with this train – the sculptures of the heroes almost look alive!”

An elderly woman talked to The Express Tribune about the richness of Pakistan’s natural resources and landscapes while her granddaughter examined the life-size sculpture of Mohammad Ali Jinnah with fascination. “Our culture is beautiful,” she said, “and we need to teach our youth about it.”

Shahid Hussain Samoon, the divisional personnel officer for the Sukkur railways administration, told The Express Tribune that the train was decorated with the purpose of revisiting the history of Pakistan and especially to teach the youth about it. Prepared in Islamabad, the train began its journey from Margalla Railway Station. It reached Sukkur after making its way through Peshawar, Rawalpindi and Lahore, among other cities, and will move on to Shikarpur on Thursday night.