Scient­ific fictio­n is not a licenc­e to be ridicu­lous
By Aiza Nasir Khan
Published: August 31, 2014
Tweet Email 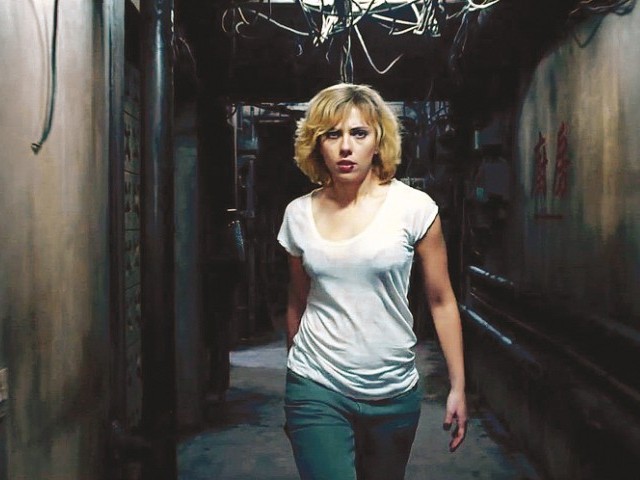 Scientific fiction is not a licence to be ridiculous.

When you go to watch Lucy, it is important to dispel logic temporarily and enjoy the events on screen for the hypothetical conjectures they are based on. The film is directed by Luc Besson, who is famous for his strong-willed female characters, something that holds true in Lucy too.

Scarlett Johansson plays Lucy, a frivolous American studying in Taipei, who lands in hot water when she gets involved with the wrong guy and is coerced by him into delivering a briefcase to Mr Jang, a Taiwanese drug lord.

For the next half an hour, the movie is captivating. You feel real terror and genuinely dread Lucy’s fate, at the hands of the ruthless Jang who has no patience for fear or tardiness. As it turns out, the briefcase contains a dangerous, synthetic drug that Jang wants to hide in Lucy and three other drug mules’ intestines and smuggle into Europe. But after Lucy’s captors kick her in the stomach, the drug starts leaking into her system and she transcends from a normal being to a super human.

In the background of all this action, and to give credibility to what is happening to Lucy, we have Morgan Freeman as the expert on the human mind and its evolution. Lucy turns to him for help when her brain capacity increases at an exponential rate and she is left with only 24 hours to live.

While the movie starts off in an explosive manner and grips you, with Lucy’s increasingly limitless powers, the premise becomes progressively absurd. The director seemed to have run out of steam and ideas on how to conclude a movie in which the heroine is able to do just about everything. And by everything, I mean traversing time and space to the age of the dinosaurs and even before that, when the cosmos was exploding and the universe was coming into being. You can’t help but roll your eyes and at times laugh at the movie because the director assumes the viewers will just ingest all that he is spewing under the guise of science and fake theories. It is true that the film is categorised as science fiction but so were movies like Inception, which was based on unusual events but was much more believable than what Besson has concocted.

As Scarlett becomes a revenge-seeking deity with every passing minute, she becomes more stoic in her acting and mannerisms, which borders on her looking bored. The supporting cast doesn’t do much to bolster the movie and are actually quite forgettable, especially since Lucy manages to make them look like chumps all the time.

While a little more attention to the script by the director would have ironed out the kinks from the plot, he does show a lot of footage that serves as metaphors to the events in the movie that adds a refreshing theatrical touch.

Lucy is recommended only if you have nothing else to watch and are willing to swallow a thinly supported theory with a great looking actress who needs to perhaps now take a break from playing the same type of characters. Don’t be surprised when you start off the movie riveted and end up leaving the theatre laughing and wondering where you could have spent the 90 minutes better.

Aiza Nasir Khan is a f brand professional at a leading multinational who loves food and travel.