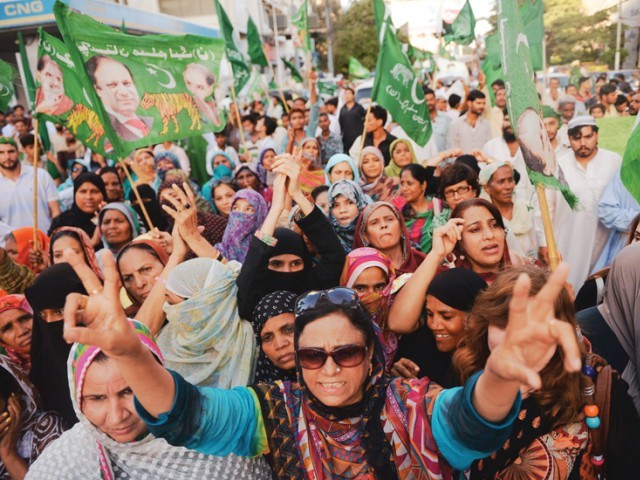 PML-N activists march during a demonstration in support of PM Nawaz Sharif in Karachi. PHOTO: AFP

The ruling Pakistan Muslim League-Nawaz and its allied parties staged country-wide rallies on Sunday to show solidarity with the government and protest against Pakistan Tehreek-e-Insaf (PTI) and Pakistan Awami Tehreek (PAT) which have been staging sit-ins in the federal capital for more than a week.

The most important of these rallies was staged in Faisalabad, in which the former Punjab law minister Rana Sanaullah Khan claimed that the PTI’s ‘so-called Azadi march’ had fizzled out.

“Both the PTI and the PAT have failed to amass even 100,000 people against their tall claims of staging Dharna of more than one million people separately,” he said, adding that Imran Khan and Tahirul Qadri could not make the entire nation hostage for personal vendetta.

He said both the leaders were using abusive language and the entire system had been put at stake as they were taking undue advantage of the government’s lenience.

“Opposition parties are standing with PML-N chief Nawaz Sharif as they believe the party garnered popular support and came to power legitimately. Imran Khan and Tahirul Qadri have brought the country and its economy on the verge of collapse,” he said.

He said the PML-N government has dragged the country out of the prevalent crises and put it on the road to progress and prosperity. “But this development and improvement are not being digested by anti-Pakistan elements and they are hatching conspiracies to sabotage the progress and prosperity process,” he added.

Earlier, about 3,000 people holding banners and flags of the PML-N marched across several city roads and reached Chowk Clock Tower from where they took a turn up to Zila Council Chowk and vowed to continue their support to the PML-N leadership.

Workers of the PML-N Islamabad also took out a rally to express their support for their leadership.  Led by MNA Tariq Fazal Chaudhry, the PML-N workers waved party flags and shouted slogans in favour of Prime Minister Nawaz Sharif and Punjab Chief Minister Shahbaz Sharif.

The rally was restricted to Abpara Market and not allowed by its leader to go beyond the market to avoid clash with the PTI workers arriving for its sit-in. A large number of motorcyclists also participated in the rally. The rally started from Chak Shehzad and culminated in Abpara Market.

In Karachi, the PML-N held a rally from Regal Chowk to the Karachi Press Club. The ‘Tahafuz-e-Jamhooriat’ rally was led by the party’s provincial leaders, while thousands of activists from across the city joined in.

Leaders and activists of the Pashtoonkhwa Milli Awami Party (PkMAP) Sindh chapter also vowed to take a stand for the protection of democracy in Pakistan and staged a rally, which started from Empress Market and culminated at the KPC.

Hundreds of PML-N workers took to the streets in Hyderabad, Nawabshah, Dadu and other districts of Sindh. Their slogans protested against the outrageous vilification of their leaders.

“Imran Khan is hurting the sentiments of the PML-N workers and supporters,” said Maha Khan, a ladies wing leader, at a demonstration in Hyderabad.

Jamiat Ulema-e-Islam-Fazl (JUI-F) also joined them to vent their anger against what it called use of unparliamentarily language by PTI against the JUI-F chief Maulana Fazlur Rehman.

Hundreds of the JUI-F workers – led by the JUI-F secretary general for Sindh Dr Khalid Mehmood Soomro – staged a rally and sit-in at Sukkur bypass. Participants of the rally shouted slogans against the PTI and demanded that the sit-in be ended to normalize activities in the capital.