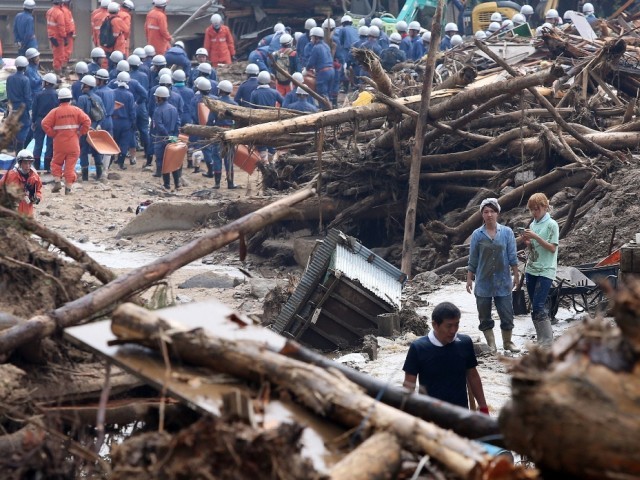 Local residents look at rescue workers looking for survivors at the site of a landslide four days after the disaster at a residential area in Hiroshima, western Japan. PHOTO: AFP

TOKYO: The death toll from devastating midweek landslides in Hiroshima rose to 50 with 38 others missing on Sunday as fresh rain stoked fears of more disasters and hampered the round-the-clock search for survivors.

Prime Minister Shinzo Abe called off a planned inspection tour of the western Japan city by helicopter on the day as his presence was feared to further complicate the search and rescue mission as rain intensified, media reports said.

Abe, 59, has been criticised by opposition parties and some media for continuing to play golf in a summer resort for about one hour after being informed of the disaster, which occured early Wednesday.

Meanwhile, two women were killed Sunday on the remote island of Rebun, some 1,350 kilometres northeast of Hiroshima, when a rain-triggered landslide crushed their home, local officials said.

The Hiroshima regional police headquarters  updated the death and missing figures Sunday morning after a 83-year-old man was confirmed dead four days after unusual downpours caused landslides that swallowed dozens of homes, many of them perched on hillside housing areas.

A total of about 3,000 rescuers including ground troops, fire fighters and police continued digging through mud and debris in Hiroshima but their operation was suspended for seven hours Sunday morning as fresh rain raised concerns about more landslips, public broadcaster NHK reported.

About 1,700 people remained sheltered at 13 safe public facilities while the Hiroshima city government upheld evacuation orders and warnings for 164,000 residents in the disaster areas.

On Rebun, an isle lying west of the main northern island of Hokkaido, 18 centimetres (seven inches) of rain fell in 24 hours, according to the region’s weather observatory.

The downpour was due to a low pressure in the area, separate from a rain front affecting western Japan.