Gearing up for the Emmys

Gearing up for the Emmys

To stir up the excite­ment for the grand night, Audi held a pre-party on Thursd­ay, August 21.
Published: August 23, 2014
Tweet Email 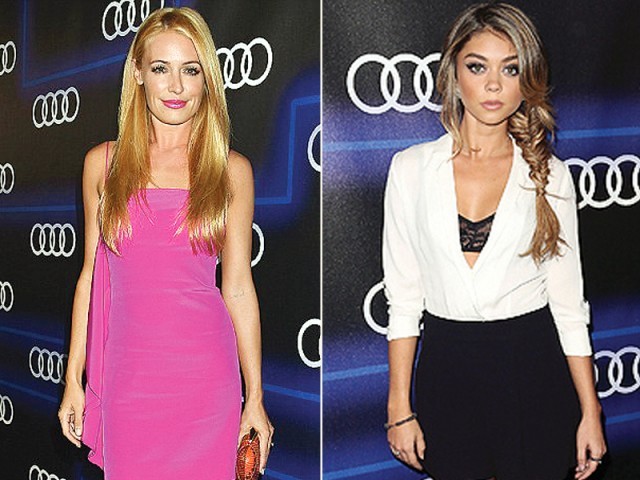 With a much anticipated wait, the 66th annual Emmy awards are soon to be held on the August 25, 2014 in California, Los Angeles.

To stir up the excitement for the grand night, Audi held a pre-party on Thursday, August 21 and hosted some of the hottest stars, who wore fancy outfits and flaunt their lavish looks in a bid to celebrate their achievements, reported E! Online. Mad Men’s Canadian star wore a Thakoon gown paired with Giuseppe Zanotti shoes which made her look glamorous and elegant. However, a bolder colour would have enhanced her look more. A gown that flattered the shape of her body and an open slit that opened up allowing some lace to peek through brought out her va-va-voom. The television host rocked it with a bold pink lip colour that matched beautifully with her pink dress and straight blonde locks. She imitated a Barbie-like look at the party which made her look very hot. But orange heels and red painted toes, paired with a bag of an in between shade of red and orange somewhat made her colour wheel look a bit scorching. Earning the showstopper’s title for the night, with flawless make up and a thick side braid, the young celebrity made her mark for the night. Wearing a tucked in white top with a black skirt she stunned in an Alice and Olivia creation that did justice to her sexy and classy look for the night. We absolutely loved her look! The actor sported a dazzling Giorgio Armani Fall 2007 look, featuring a strapless dress with PVC dominatrix-style bodice, countered by a sweet stripped horizontal lined skirt. Despite the stripes being regarded as a big ‘fashion oops’, they didn’t affect the celebrity’s oomph factor. Her metallic Christian Louboutin pumps, H stern jewellery and metallic gold clutch were a brilliant choice for the outfit followed by a hot red pout which served as the icing on the cake.

The homecoming of fashion heavyweights