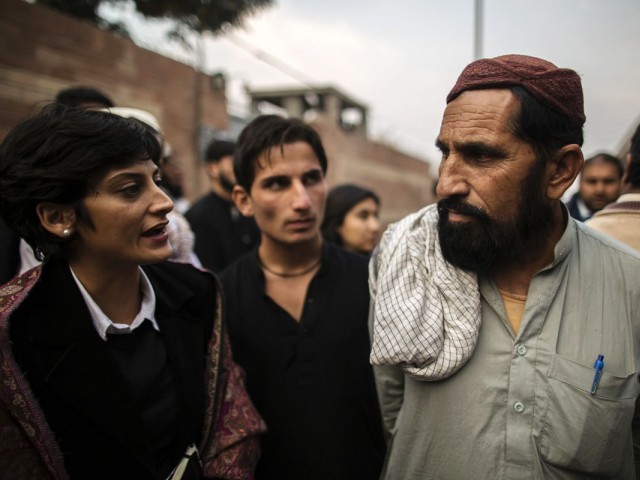 Lawyer Sarah Belal (L) talks to Wakeel Khan (R), the father of one of the prisoners, Hamidullah, outside the Central Jail in Peshawar December 2, 2013. PHOTO: REUTERS

Nine Pakistani detainees have returned home from Afghanistan’s Bagram prison, a group representing them said on Thursday, as US-led international forces prepare to withdraw from the country by the end of the year.

Afghan authorities took over the detention facility for militants in 2013, renaming it Parwan, but the US remains in charge of foreigners and there are believed to be around 15 Pakistanis still in custody.

“The families of the detainees have been informed by the International Red Cross (ICRC) that their loved ones have been handed over to the Pakistani authorities,” a statement by the Justice Project Pakistan (JPP), which has been pursuing Islamabad to secure their release, said.

It described one of the nine men as a 39-year-old Abbottabad businessman, who disappeared on a visit to Afghanistan in 2008.

“After hearing the news of his detention in Bagram, his aged mother passed away. Father of three Shoaib Khan was the main bread winner of the family. After he was detained in Bagram Shoaib’s aged father has had to go back to work to make ends meet,” it added.

Sarah Belal, lead counsel for JPP, said: “We are pleased to learn about the recent releases from Bagram and are delighted for their families – their years-long nightmare is finally coming to an end.”

She added that the detainees were currently under Pakistani government custody and called for their speedy release.

Rights groups have accused US authorities of carrying out prisoner abuse at the facility, and a US army report found that two inmates were beaten to death in 2002.

In some cases, US officials have found little evidence of detainees’ involvement in militancy, but they have remained in custody due to delays in processing their repatriation. AFP

The JPP has taken the Pakistani government to court to push for the remaining detainees’ liberation ahead of the withdrawal of foreign troops by the end of 2014, fearing they could be caught in legal limbo.

Islamabad sit-in updates: Third round of talks end with PTI’s demand for PM to resign ‘for 30 days’