Slow and steady: 220 turtles return from their Chinese Holiday

Slow and steady: 220 turtles return from their Chinese Holiday

Smuggl­ers’ plans turned turtle when they were appreh­ended in China in June; can face life senten­ces
By Shabbir Mir
Published: August 20, 2014
Tweet Email 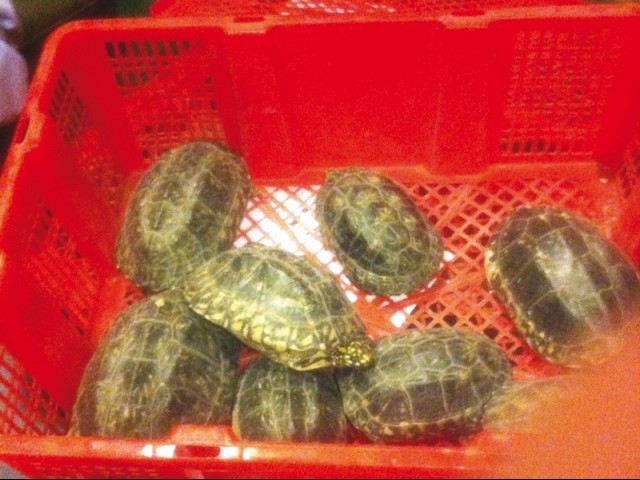 The freshwater turtles had been smuggled from Karachi via G-B. PHOTO: EXPRESS

GILGIT: Over 200 turtles smuggled into China finally found their way back home to Pakistan on Tuesday, thanks to the collaborative efforts of Chinese authorities as well as the Gilgit-Baltistan (G-B) and Sindh wildlife departments.

The consignment was seized in the neighbouring country during the last week of June after authorities received information on “unusual luggage” coming from Pakistan. When intercepted, experts determined the consignment contained 220 hard-shell turtles. Earlier reports had put the number at 180.

“The freshwater turtles were smuggled to China from Karachi via G-B,” Chief Conservator Wildlife Javed Ahmed told the media in Gilgit.

The animals had been packed inside boxes, each containing 10 turtles. “They had been collected from Karachi and Sukkur by smugglers, two of whom belong to G-B.”

Ahmed, who recently reached Gilgit from China, along with 10 Sindh wildlife officials, successfully negotiated the release of the turtles. The animals are listed in the Convention on International Trade in Endangered Species (CITES), thus their exchange is banned.

CITES, an international agreement between governments, aims to ensure that international trade in animals and plants does not threaten their survival. The agreement was drafted after a resolution was adopted in 1963 at a meeting of members of International Union for Conservation of Nature.

The smugglers, in custody of Kashgar authorities, may face life imprisonment under Chinese laws. They were identified as Nizamuddin, a resident of Gligit living in Karachi, and his accomplice Rizwan Karim, a resident of Sost, the last town before China. Sindh Wildlife Department officials will be transporting the turtles back to their home province and will release the animals back into their natural habitat.

”The turtles are in good health and will survive the two or three-day trip back home,” said one of the officials.

Uzma Naureen of WWF said this form of smuggling had taken place in the past. She said soft-shell turtles are smuggled more often than their hard-shell counterparts. “Turtles have been illegally smuggled to Hong Kong, South Korea and Vietnam,” she said, adding they are collected from K-P, Punjab and Sindh.