Even those who sympat­hised with the party’s stand will be tested by the way things have been handle­d thus far.
By Editorial
Published: August 19, 2014
Tweet Email 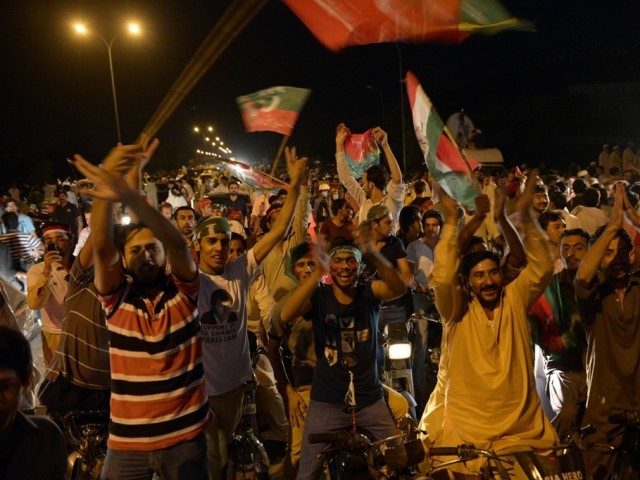 he PTI may believe its stand is justified. But let there be no doubt: its methods and strategy have left much to be desired. PHOTO: AFP

The outcome of Pakistan Tehreek-e-Insaf (PTI)’s long march-cum-sit-in is a classic example of an overplayed hand and the lack of clarity in terms of both political objectives and strategy.

The discourse surrounding the events of the past few days has revolved around whether the demands put forward by the PTI and its chief, Imran Khan, are constitutional. That is perhaps a question that will polarise opinion — although probably not equally. On the face of it, the right to protest and put forward demands is the right of all political parties and individuals — no matter how obtuse those demands may be. However, asking an elected prime minister to simply resign based on street power and without any sort of parliamentary or legal process is asking for too much and displays a lack of serious political intent.

Whether or not you agree with his stand that the current assemblies lack credibility because of the sort of allegations being put forward, the PTI’s approach has been the most basic problem marring its movement against the current government. Imran Khan gets points for stressing that military intervention is not acceptable and also for calming a frenzied crowd and stopping them from crossing over into the Red Zone of the capital, which houses many sensitive installations, including foreign missions.

But even the most sympathetic reading of the PTI’s game plan thus far would paint a sorry picture. Thus far, Imran has rejected a good offer from the prime minister to form a judicial commission to probe his allegations of rigging in the 2013 general elections, and his party has failed to attend the high-profile committee formed to suggest electoral reforms before the next elections. Both platforms were originally floated by the PTI and its chairman, and both are indeed commendable achievements. Both would have fit in well with the stand that Imran and the PTI have taken. But they now seem to be demanding nothing short of the prime minister’s resignation.

It is almost clichéd to say that politics is all about compromise, but one cannot help but stress this point in the PTI’s case. Even those who sympathised with the party’s stand will be tested by the way things have been handled thus far.

Then, one can also launch into a monologue about how a “civil disobedience movement” is detrimental to the country, but that, once again, isn’t the point at the heart of the matter. Does the PTI really think that such a movement will hurt the government? That his imploring supporters not to pay taxes or utility bills is a strategy that doesn’t have much scope. On the one hand, the poor, who he says he is representing, don’t really come into the tax bracket. And as for not paying utility bills, do the PTI and Imran Khan think that their supporters from the middle and lower classes can actually get away with this without serious repercussions?

Further down the road, the PTI has two more options that it could pull the trigger on: one, resigning from the assemblies; two, actually pushing its supporters into the Red Zone. The latter is something that would not only put the party and its supporters on the wrong side of the law with serious repercussions, but also seriously compromise the security of the country’s most sensitive locations. The path of resignations, if reports are to be believed, not only doesn’t have the support of his party members, but also won’t do much to hurt the current government. It could be a principled stand, yes, but that would be it in terms of short-term outcome. In any case, it has hurt the party that it has questioned the legitimacy of the assemblies formed through the 2013 elections and not resigned itself already right off the bat. Such a move now would be less about principle and more about running out of options.

The PTI may believe its stand is justified. But let there be no doubt: its methods and strategy have left much to be desired.