'The house has been interf­ered with many times,' writes archit­ect
By Sanam Maher
Published: August 14, 2014
Tweet Email 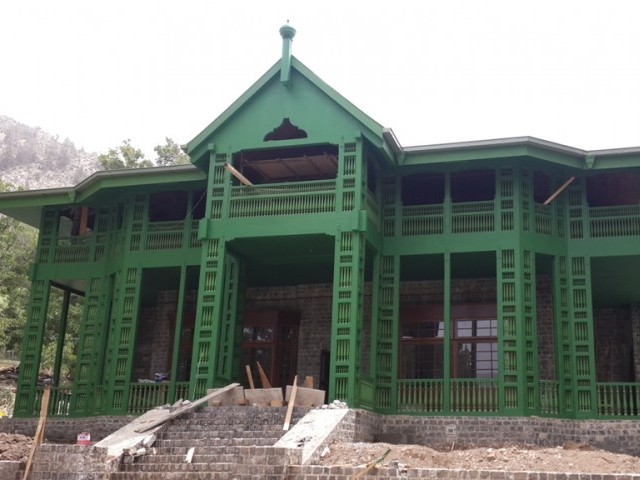 'The house has been interfered with many times,' writes architect. PHOTO: NAYYAR ALI DADA

ZIARAT: “We have a tradition in our Pashtun culture,” says Feroze, the manager of a guest house in Ziarat. “When there is a shaadi or a baby is born, we get out our guns. We’re happy! We fire!” A little after 1 am on June 15th last year, Feroze woke to the sound of gunfire. “I thought someone had their first baby boy because it was so intense,” he said. A few minutes later, he learned that Ziarat Residency, Mohammad Ali Jinnah’s home in his last few days in 1948, had been attacked by militants.

The bomb disposal squad removed six more bombs planted inside the house, but not before furniture, artifacts and photographs inside were burned and one police official lost his life.

Within a month, architect Nayyar Ali Dada was approached to oversee the Residency’s restoration. While he has a record of such conservation projects, it was Dada’s prior experience with the house that made him, as he puts it, a ‘natural choice’ – in the 1990s, the government recruited Dada to convert the Residency into a museum space after a fire. Dada’s handwritten notes from a visit to the Residency last year are telling – ‘The house has been interfered with many times,” he wrote. “It was very sad,” he explains. “The house had been painted red and white and it was used in a cold blooded way as a guesthouse.” Additional kitchens were added, bathroom fittings ripped out and replaced. Rose pink tiles had been installed in Jinnah’s bathroom, used as a guest bathroom. “The building had been mutilated,” Dada says. Much of the furniture – including the Quaid’s and Fatima Jinnah’s beds – was in use, the wooden surfaces covered with carved out initials and messages.

Initially, a committee was formed to discuss the restoration and included architects and conservators Kamil Khan Mumtaz and Yasmin Lari. “I suggested that all provinces should be involved in the restoration,” says Lari. “The woodwork could come from Khyber Pakhtunkhwa, the stone from Balochistan or Sindh and so on. It could have been a national project.” Lari felt the damaged furniture and fittings “should be placed in the restored house in the same condition.” She explains, “A building can show its history and what it has gone through. People should remember these events.”

However, Dada disagreed. “There were suggestions to cordon the building off as a ‘lesson’ and to make an exhibit of it. But a restoration project is not a design project,” he says. His aim was not to treat the Residency as an archival building – where elements cannot be tweaked from the original – but as a site where the spirit of the original must remain intact. Thus began a 140 million rupee-project to recreate everything from the powder blue tiles, faucets and commode in the Quaid’s bathroom, to the form of wiring originally used. “We worked with a local architect, Naseer Ahmed Hijazi, and used old photographs and documentation from the earlier restoration,” Dada says. However, many photographs featured elements that were supposed to be originals but were in fact not. “The items added by various governors to the house created a lot of confusion and we had to judge what had been taken away or replaced,” he explains.

It was only in May this year that the architects were able to begin work, ahead of an August 14th inauguration. “There was a great deal of inefficiency and bureaucracy,” Dada says. “The work was done under a lot of pressure.” He feels the work ‘should have been done more carefully’ and concedes, “The artifacts could have been created with a lot more accuracy, but we simply didn’t have the time. We tried to catch that period, that ambience, and I think we’ve been 80 per cent successful.”

On the first day after the Eid holidays and just six days shy of the prime minister’s visit for an inauguration ceremony that has changed dates four times, the house is alive with activity. Workers perch in the branches of the swooping juniper trees, trimming the foliage, a gardener tends to rows of coleus plants along the front porch and the whine and hammer of tools can be heard well beyond the curved driveway.

No matter which direction you face while standing in the house, you’re always looking out windows thrown open to the verdant gardens where yellow daisies grow – the light inside is hued a crisp, forest green, a paler shade of the original colour of the Residency’s exterior.

On this day, the workers have just finished polishing the wooden interior to a high gleam – the house is constructed of three kinds of wood, largely Burma teak – and furniture has just arrived from Lahore, where it was constructed in typical colonial style. The workers are edgy, they turn their faces away as you enter the room. “We don’t tell anyone in the bazaar what we are working on,” one worker says. “The contractors don’t tell the people who they are or why they are here. It’s not safe.”

On the second floor, a terrace runs all the way across from Fatima Jinnah’s room, to the Quaid’s and his personal physician’s rooms. The chief engineer, seated in the garden below, gestures frantically. “Please leave. The people from outside are feeling very uncomfortable that you’re here,” he says. This kind of suspicion dogs you out the gate and into teahouses down the road. “We used to be friendlier,” remarks a local. “If a pardesi came to Ziarat, we would give them a place in our homes. Now those homes are guesthouses and the people are not mehmaan nawaz.”

Feroze concurs, saying the aftershocks of the 2013 attack linger. “This year, no visitors from Karachi or Punjab came to Ziarat. We had some locals from Pishin, Khuzdar and Turbat,” he says. “If something like this happens near your home, then your guests will regard your home with fear. If they come visit you, they will still give you respect but it will be edged with fear. People here are not happy because of that,” he explains.

Feroze’s guesthouse is vacant, the rooms locked. A few days ago guesthouses were ordered to ask any guests to leave – for security reasons, they were told. “The few visitors I did have, I had to turn them out,” Feroze says. “Some cities are cities of markets, others are cities of masjids. Ziarat is the shehr of guesthouses,” he says. “Or it was.” He recalls that in the 1990s, he would practice his English-speaking skills with tourists who came to this hill station. At the time, the Residency’s doors were wide open, a lone police official deputed for security. “We used to visit the house every other day,” Feroze says. He claims he has seen its belongings squirreled away over the years, the carpets and furniture disappearing overnight only to be replaced by imitations.

While the restored house has a souvenir shop and a mosque, some in Quetta say they have no plans to visit Ziarat. “This house was not remade for us,” says Manan, a resident of Quetta who makes roughly Rs20,000 a month. “It was made for the Grade 20 and 22 people.”

The drive here from Quetta, said to take 1.5 hours, takes twice the time as the roads are potholed. Lavender and sunflowers grow along the curve of a crumbling road as you make your way to the Residency. Ahead of the PM’s visit, two boys are busy paving the road that leads to the Residency. The chief minister’s spokesperson Jan Mohammad Buledi says that the restoration will be accompanied by extensive road works in the area. “We have also made arrangements for strict security and FC personnel will oversee this,” he says. “Now no one will be able to do any nuqsaan to this house.”