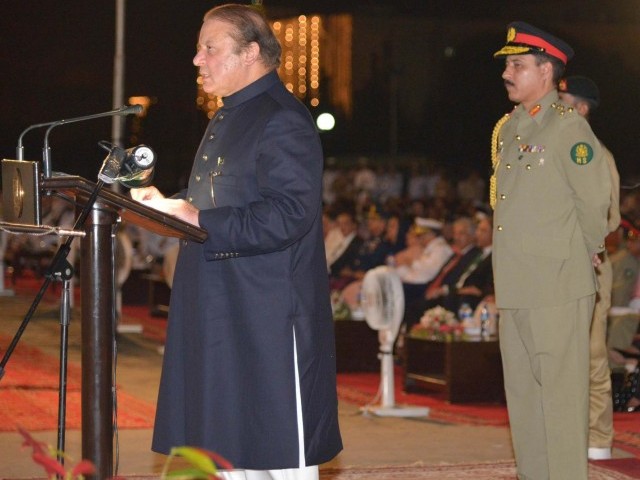 As he kicked off Independence Day celebrations in the federal capital late Wednesday night, Prime Minister Nawaz Sharif vowed that his government would protect democracy at any cost and ensure the rule of law in the country.

In his speech at an impressive Independence Day ceremony at the premises of the Parliament House, the premier urged the nation to build Pakistan as a democratic, moderate and progressive country, “in accordance with the vision of Quaid-e-Azam Muhammad Ali Jinnah.”

“I felicitate the nation, I once again call upon every Pakistani to stand firm and united, and work diligently for a progressive, prosperous and peaceful Pakistan,” he said.

Stating that Operation Zarb-e-Azb against militants in the North Waziristan Agency was progressing successfully, the prime minister said the entire nation salutes those martyred in this war. “We will not leave our heroes alone… the entire nation will remember their contribution,” he said. “The nation has full confidence in its armed forces and we can shed the last drop of blood for our country.”

On the international front, the premier reiterated the desire for good ties with India and called for a peaceful resolution to the Kashmir issue. He once again stressed that Pakistan wanted a stable Afghanistan and durable solution to conflict in the country.

Prime Minister Nawaz also condemned Israeli aggression against Palestinians in the Gaza Strip and urged the international community to take notice of it. “Institutions like the UN will lose credibility in the eyes of the public if they cannot do anything about such aggression,” he said.

After a prolonged hiatus, the government arranged a ceremony to celebrate the country’s independence this year – a move many have seen as a bid to counter protest marches being organised by PTI and PAT.

A highlight of the ceremony was a special parade by the armed forces of Pakistan for the first time in several years. The parade included a fly past by fighter jets of the Pakistan Air Force.

The ceremony was attended by members of Parliament, the three services chiefs and diplomats, along with other key personalities and officials.

“Prime Minister Nawaz Sharif will inaugurate the Ziarat Residency on August 14,” the spokesperson for the Prime Minister’s Office said on Wednesday. The premier’s visit to the northern district of Balochistan is part of the 30-day celebrations announced by the government to mark the 68th Independence Day.