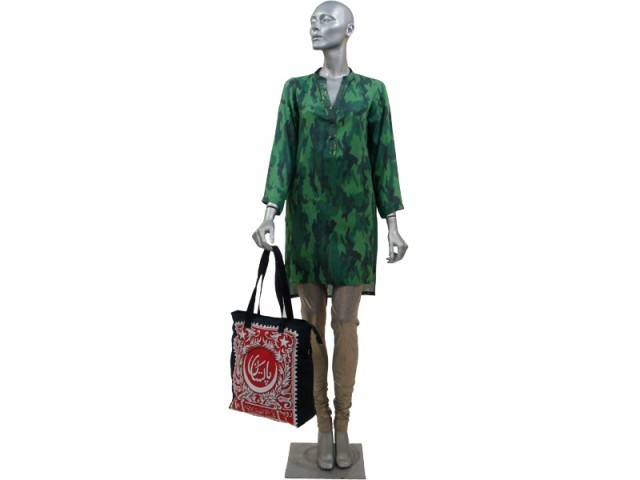 With their latest collections, designer virtuosos Maheen Khan and Mahin Hussain allow you to revel in the spirit of Independence Day. PHOTOS: PUBLICITY

Pakistani designers are giving us many reasons to embrace jashan-e-azadi as fashionably as we can. Style guru Maheen Khan and accessory designer Mahin Hussain’s Independence Day-themed collections exude vibrancy amid the despairing state of affairs in the country. Speaking to The Express Tribune, Khan and Hussain give us a sneak peek into their collections.

Khan’s ‘Dil Dil Pakistan Azaadi Collection’ is a ready-to-wear line that comprises stamp-inspired bags, stamp-design t-shirts and kurtas for men, women and children to sport with their heads held high. “It is the only comprehensive collection by any high-street brand in Pakistan that caters to everyone,” says Khan. “It is a reflection of Gulabo’s ‘Proud to be Pakistani’ ideology.”

By incorporating green camouflage kurtas into the collection, Khan pays homage to the armed forces of Pakistan. She states that her collection does not merely target fashion forward customers. “It’s for patriots everywhere who shout out ‘Pakistan zindabad’ from the heart!” she comments.

The collection, which flaunts “irresistibly patriotic” pieces, has been in stores with a special “Azaadi promotion” for the past week. If you haven’t found anything yet to project your patriotism in style, this collection might just work for you. Hussain’s ‘Independence 2014’ totes and clutches hit the right note. Paying a tribute to the Quiad’s motto: ‘Unity, Faith, Discipline’. Hussain says she has drawn inspiration from the political situation in the country for her designs. “I felt the political turmoil in the country called for us to go back to our roots and derive strength from the wisdom of the founder of the nation,” she shares. “We all are affected by the current situation and I have been able to channel my thoughts and ideas into my work.”

Her collection juxtaposes her quirky signature style with patriotic messages. “There’s a tote, which boldly spells out ‘Faith’ and it’s the simplicity of this message that makes it so effective. The word ‘Unity’ designed on a statement clutch is a reflection of what can bring the country out of its present chaotic sate,” explains Hussain.

“Muhammad Ali Jinnah’s famous quote ‘Expect the best prepare for the worst’ has been written on pouches, make-up bags and toilet kits.” She feels that her creations symbolise strong-willed, individualistic women.

The collection, which boasts 10 designs, most in two colourways, ranges between Rs2,500 and Rs7,000. If you decide to go all-white for your Independence Day look, Hussain’s handbags can add the right amount of colour to your look.