The body of a young man, bearin­g tortur­e marks, was found from a garbag­e dump.
By Our Correspondent
Published: August 10, 2014
Tweet Email 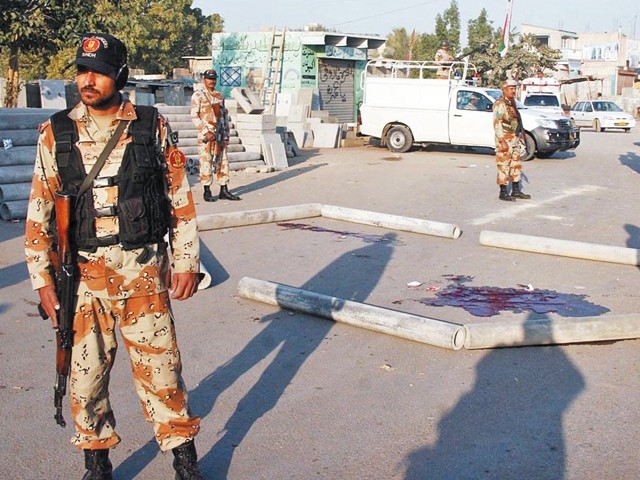 According to Rangers personnel, the raid was conducted at the gangsters' hideout after the paramilitary force was informed about their presence in Khadda Market, Lyari. PHOTO: ONLINE/FILE

A suspected member of the Lyari gang war, allegedly involved in 11 cases of target killings, was killed during an encounter with the paramilitary force in Lyari. Separately, the bodies of two men and a woman were found from different parts of the city on Saturday.

According to Rangers personnel, the raid was conducted at the gangsters’ hideout after the paramilitary force was informed about their presence in Khadda Market, Lyari. The Rangers faced resistance from the gang members and in the subsequent exchange of fire, one of the gang members was killed. The deceased was later identified as Ashfaq, who was associated with the Wasiullah Lakho group of Lyari gangsters. The spokesperson added that Ashfaq was involved in around 11 cases of target killings and was also wanted in other cases of crime.

A woman, identified as 27-year-old Irshad Bibi, wife of Kareem Buksh, was shot dead inside her house in Shah Latif Colony, within the limits of Mauripur police station. SHO Chaudhry Saleem said that the deceased was residing at her parents’ home after a dispute with her in-laws. He added that the victim’s brother, Dilawar, and uncle, Shahnawaz, shot and killed her over a property dispute. Her body was taken to Civil Hospital, Karachi, for autopsy.

The body of an elderly man was found from inside his house in Sultanabad, Manghopir. The deceased was later identified as 65-year-old Maqsood Ahmed Ansari, son of Shaikh Masood Ansari. Police officials said that the deceased used to live alone in the house and had died around three days earlier. The cause of death has yet to be ascertained.

Separately, the body of a young man who has yet to be identified was found from a garbage dump in Old Muzaffarabad Colony within the limits of Quaidabad police station. Police officials said that the victim’s body bore several marks of torture and it seemed that he was killed after having been kidnapped.

Take the drops: Three-day polio drive to start in Thatta