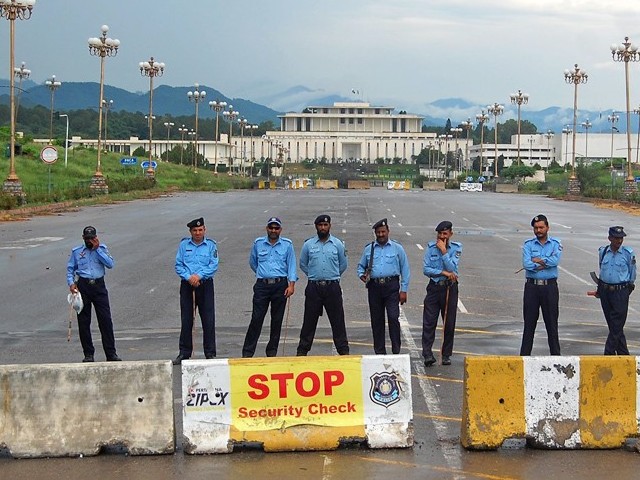 The ICT administration is also considering suspending cellular services in the twin cities until the march is over. PHOTO: MUHAMMAD JAVAID/EXPRESS

In an apparent bid to block Pakistan Tehreek-e-Insaf’s scheduled freedom march in the federal capital, the Islamabad Capital Territory (ICT) administration on Friday imposed a series of measures including a two-month ban on brandishing arms and outlawing pillion-riding and prohibiting the assembly of more than five people under Section 144.

The government has already started blocking all important entry and exit routes in the capital and hundreds of containers have been moved to key locations. Islamabad’s Red Zone has already been sealed off by containers and barbed wires. In addition to these measures, the government will erect toll plazas blocking roads leading to Islamabad and Rawalpindi on the night of August 12.

The ICT administration is also considering suspending cellular services in the twin cities until the march is over. Islamabad police, meanwhile, have prohibited the stock, sale and purchase of firecrackers in the city.

When contacted, SSP Muhammad Ali Nekokara said a decision on where exactly the containers will be placed has yet to be taken. “We have different contingency plans for different situations and are fully prepared to deal with any kind of situation,” he said, adding that the police will implement the decision taken by the government in letter and spirit.

PTI leaders have deplored the Islamabad lockdown and the imposition of Section 144, saying that staging a protest is their democratic right. “We cannot be deprived of our right [to protest] through any section [of the law]… the government should straightaway admit that this is not a democracy anymore,” PTI leader Shireen Mazari said on Friday.

The ICT administration is likely to place the containers at Bara Kahu, Peshawar-Islamabad Motorway Toll Plaza, GT Road and Faizabad.

Meanwhile, the administration has cancelled the leaves of all police officials in the city and has directed their deployment to the Red Zone, where they will remain till political situation in the country normalises. The Islamabad police will be assisted by 1,000 additional policemen from Azad Jammu and Kashmir, with around 1,500 Rangers personnel providing backup.

There is also speculation that the senior leadership of the PTI, including Javed Hashmi, Asad Umar and Shireen Mazari, could be placed under house arrest to neutralise the Azadi March. The reports could not be confirmed, however.

All major public hospitals in the twin cities have been put on high alert to deal with any untoward incident during the Azadi March on August 14.

Talking to The Express Tribune, Shaheed Zulfiqar Ali Bhutto (SZAB) Medical University Vice-Chancellor Prof Javed Akram said the hospital has been on high alert since August 4 and will continue till the end of the Azadi March. He said the blood bank in-charge has been directed to stock at least 100 blood bags each for all blood groups and senior doctors have been asked to take rounds in the evenings as well.

“The Pakistan Institute of Medical Science (Pims) has also arranged one mobile hospital which will be there on spot to provide first medical aid  to the participants, police personals, media person who will be at the Azadi March,” he said.