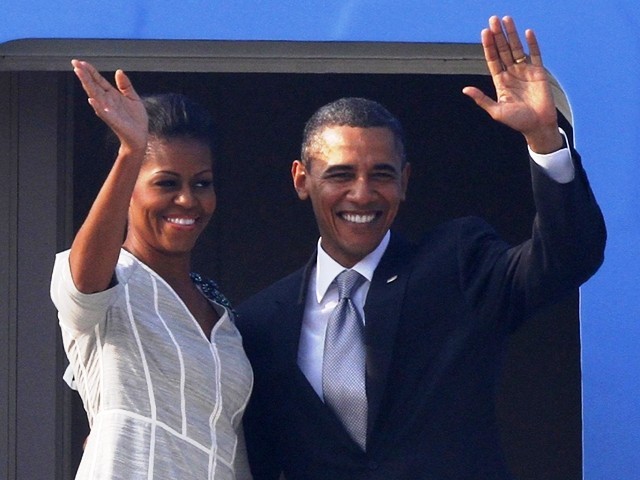 Kashmirs criticised US President Barrak Obama for ignoring the Kashmir dispute during his visit to India. PHOTO: REUTERS

SRINAGAR: Kashmiris on Tuesday accused US President Barack Obama of double standards for criticising India’s silence on rights abuses in Myanmar while ignoring oppression in their region.

“The US president should have also criticised Indians for killing innocent and unarmed protesters in Kashmir,” said Javed Mir, a senior leader of the pro-independence Jammu Kashmir Liberation Front.

“Here we also have peaceful protests that have been met with brute force but Obama chooses to remain silent on that,” said Mir.

During an address to India’s parliament on Monday, Obama chided his hosts for repeatedly having “shied away” from condemning rights abuses in countries like Myanmar.

“When peaceful democratic movements are suppressed, as they have been in Burma (Myanmar), then the democracies of the world cannot remain silent,” Obama said.

“For it is unacceptable to gun down peaceful protesters,” he added.

Kashmiri leaders like Mir argued that Obama’s description was a perfect fit for the recent unrest in Indian Kashmir which saw 100 people killed in street protests, most of them shot dead by security forces.

“We are sad he chose to remain silent on grave human rights violations being committed by Indian troops in Kashmir,” said All Parties Hurriyet Conference (APHC) leader Mirwaiz Umar Farooq.

“We had high hopes he would condemn the brutal use of force against peaceful protesters in Kashmir and we are disappointed he didn’t,” Farooq said.

For more than three months, thousands of protesters, many of them teenagers, fought pitched battles with security forces in the highly militarised disputed territory.

“Like in Burma, political leaders here are jailed for raising their legitimate demands for their right to self-determination,” said Shabir Shah, who has spent more than 20 years in different Indian prisons.

In a nod to Indian sensitivities over outside interference in Kashmir, Obama made it clear during his three-day visit here that the United States could not “impose a solution” on India’s bitter territorial dispute with Pakistan over the mountainous region.

But Farooq argued there was still a role for Washington to play.

“The US should be a facilitator if mediation is not acceptable to India,” he said.