‘Azadi March’: For PTI, resignation option not off the table

‘Azadi March’: For PTI, resignation option not off the table 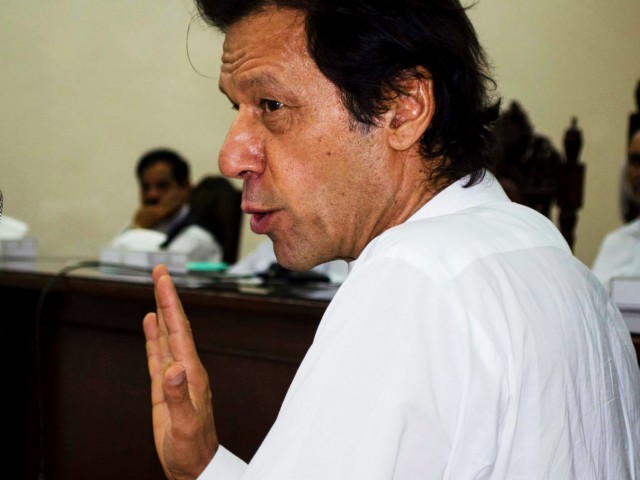 "We should not defuse our charged workers who are committed to get their rights through democratic means," PTI chief Imran Khan. PHOTO: PTI FACEBOOK PAGE

Amidst feverish preparations for the scheduled ‘Azadi March’, the Pakistan Tehreek-e-Insaf (PTI) dropped a broad hint that it could use all options, including resignation of MPs from the assemblies, to press the government into accepting its demands.

The PTI leadership has already slammed the door shut on negotiations with the government. The party has started mobilising its supporters for the Azadi March at Islamabad’s D-Chowk where it expects one million will show up on August 14.

On Saturday, PTI chairman Imran Khan met his party leaders from central Punjab, led by provincial president Ejaz Chaudhry. Together they reviewed preparations for the Azadi March and discussed the possible measures the government might take to prevent the supporters from reaching Islamabad on August 14.

“We [PTI] haven’t asked our lawmakers to submit their resignations – but we do have this option,” Dr Shireen Mazari, the party’s information secretary, said in a statement. “A decision in this regard will be made at the Azadi March at D-Chowk in Islamabad.”

Hours earlier, Engineer Hamidul Haq Khalil, a federal lawmaker of the PTI from Khyber-Pakhtunkhwa, said that all MNAs of the party from the province will hand their resignations to party chairman Imran Khan at a meeting scheduled at 3pm on Sunday, at least an hour before the National Assembly session.

“We will submit the resignations since this is the leadership’s decision,” Haq told The Express Tribune. He precluded the possibility of any lawmaker going against the party line. “Imran is our chairman and we are bound to follow his directions.”

In its last meeting held before Eidul Fitr, the PTI core committee had decided that resignations from assemblies would be kept as an option. It will ask its legislators to submit their resignations to the party chairman and not the National Assembly speaker. And Imran can use this option if and when needed.

The government, however, appears unmoved by the possible move. Information Minister Senator Pervaiz Rashid said that even if the PTI lawmakers resigned it would have no impact on the government which would go for by-elections on all vacated seats.

“If PTI parliamentarians tender their resignations, we will hold by-elections. Resignations by any single party MPs do not make any difference in the 342-member house. If a precedent is set [by calling midterm elections], no assembly would be able to complete its tenure in the future,” Senator Rashid told The Express Tribune.

The minister claimed that PTI’s own lawmakers were unwilling to quit the assemblies. “There will be a rebellion within the PTI on such a controversial decision,” he claimed. “We cannot dissolve the assembly on the whims of any individual. This is a crime that we’ll never commit. We respect the mandate of the masses and sanctity of the vote.”

Nonetheless when asked about the government’s reported negotiations with the PTI and other protesting parties, the minister said that “in politics, doors are never shut for negotiations”.  The PTI has already made it clear that the “time for negotiations is over”.

The PTI has 34 members in lower house of the parliament that include 27 general seats, six reserved for women and one for minorities and the party is considering, has not taken the final decision, to resign from the NA.

As part of its efforts to mobilise workers for the Azadi March, the PTI chairman has asked president of the Punjab chapter of his party to ensure maximum participation in the rally from the province.

In his letter to Ejaz Ahmed Chaudhry, Imran said, “As the time for long march approaches, we need to build up a hype that helps us to achieve our million man target, mobilise the general public into this movement, and it creates enough publicity to scare our opponents”.

PTI workers are determined to reach D-Chowk on August 14 in huge numbers even if the government bows down to all its demands, said one of the senior party leaders in an informal talks. “The government appears to be giving in to our pressure,” he added.

Now the main demand is not thumb verification of the votes in four constituencies, we want a full audit of the 2013 election like in Afghanistan, he added.

The PTI leaders believe any deviation from the million-man march and from key party demands at this stage means denting the group’s popularity, as experienced by Tahirul Qadri’s PAT during the 2013 sit-in. “We should not defuse our charged workers who are committed to get their rights through democratic means,” he added.