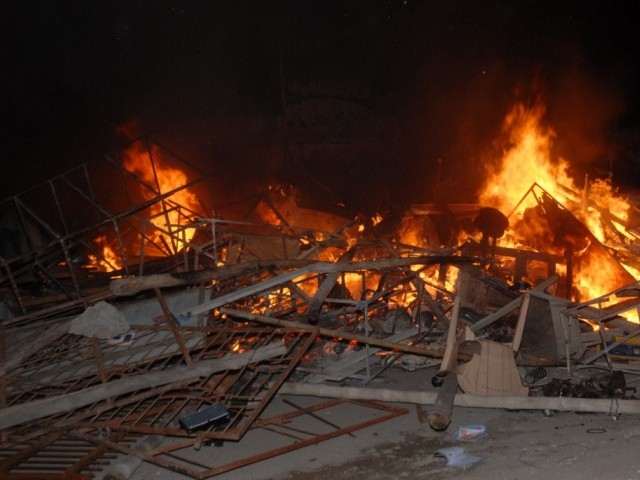 The site of the incident. PHOTO: EXPRESS

GUJRANWALA: Three members of the same family including one woman and two minors were killed and nine other people were injured when an angry mob set a house on fire in Arafat Colony, Gujranwala.

According to details, the clash started when an Ahmadi, Saqib s/o Ahmad Din, allegedly shared a blasphemous picture with Ejaz on Facebook.

Ejaz along with Zakariya s/o Imam Jama Masjid Sadiqia Qari Muhammad Hakim and others gathered outside Saqib’s house to protest.

However, Ahmadis belonging to the community had gathered at a Dr Sohail’s house at the time. The angry mob attempted to raid the doctor’s house in search of Saqib when, according to Ejaz, people inside the house opened fire on them, injuring Zakariya.

After that the angry mob set one house on fire, due to which Bashira Bibi, 30, and two minors including eight-month-old Hira, and five-year-old Kainat, died of suffocation, while nine others, including a woman and two minors were injured.

The injured were transferred District Hospital Gujranwala where they were given medical treatment. They were identified as Ruqia, Razia, Humaira, Noor Tabassum, Samar, Atta, Atiya and an infant. However, they were later shifted to Rabwah hospital because of security reasons.

SHO Peoples Colony Station Malik Asghar has confirmed three casualties. Six houses and a shop were damaged in the incident.

A cases was registered against 420 people, including 20 nominated, under sections 302, 436, 148 and 149 of Pakistan Penal Code and Section 7 of Anti-Terrorism Act on the complaint of Bhutta, father of the deceased minors, at the Peoples Colony Station.

Majority of the male members of the Ahmadi community have still not returned to their homes out of fear of another attack.

Family members have taken the bodies of the deceased into their custody and are heading towards Rabwah for burial.

Also, a seven-month pregnant woman, identified as Mubashira, had a miscarriage because of the incident.

Police have been deployed in the locality and no arrest has been made till the filing of this report.