Obama hints at support for UNSC seat for India

Obama hints at support for UNSC seat for India

India may still face opposi­tion from countr­ies like China even if Obama suppor­ts its demand for a perman­ent seat.
By Reuters
Published: November 8, 2010
Tweet Email 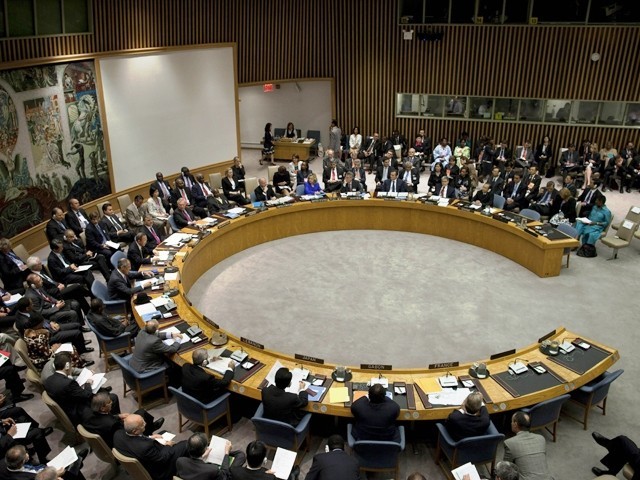 The five permanent members on the UNSC with veto power are Britain, China, France, Russia and the United States. PHOTO: AFP

NEW DEHLI: President Barack Obama hinted on Monday the United States could lend support to India’s demand to have a permanent seat on the UN Security Council, a move that could help cement growing ties with the emerging global power.

“We discussed the need for international institutions, including the United Nations, to reflect the realities of the 21st century,” Obama told a joint news conference with Indian Prime Minister Manmohan Singh. “I will be addressing that issue of a permanent seat for India in my speech to Parliament today,” Obama added.

India wants a seat on the council, saying it would reflect the growing weight of the G20 nation as its trillion dollar economy helps spur global growth and its government exerts influence over issues from Doha trade to climate change talks.

But although Obama could support India, there would still be major obstacles for India to gain the seat with possible opposition from other countries like China. India has also often stood against the United States in UN votes.

Obama spoke from New Delhi on the first leg of a 10-day Asian tour that has has been hailed as moving the United States closer to India as Washington tries to revive a weak economy and gather support to exert pressure on China on its currency ahead of a G20 summit in Seoul this week.

Whether answering questions from students over Pakistan or talking to farmers by video link, Obama’s trip has won positive coverage in a nation where US cultural influence is growing as is a new middle class, millions of consumers strong. Obama has met with some criticism at home for travelling abroad so soon after his mauling in mid-term elections over unemployment, but has been well received in India, vowing to lift export controls and announcing $10 billion in business deals.

Obama will visit Indonesia, South Korea and Japan on the tour that will see Washington push to prevent countries unilaterally devaluing currencies to protect their exports, a top theme at the G20 meeting in Seoul this week. On Sunday evening, Singh hosted a dinner for the Obamas, where military bands played to 80 senior politicians, business leaders and film stars on the lawns of the prime minister’s private residence over a spread of traditional Indian delicacies.