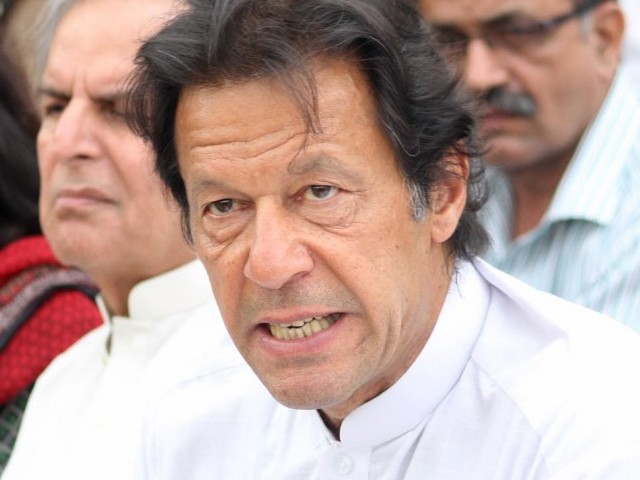 “As the world watches Israel losing all sense of humanity and breaking all international norms of behaviour, it is the UN to which it looks for intervention”,said Pakistan Tehreek-e-Insaf chairpman Imran Khan. PHOTO: INP

ISLAMABAD: Pakistan Tehreek-e-Insaf chairman Imran Khan wrote a letter  to United Nations Secretary General Ban Ki Moon on Friday and urged him to play his role to stop the genocide of innocent Palestinians.

Drawing Ban’s attention towards the genocide of innocent Palestinians in Gaza at the hands of Israeli forces, in his letter, Khan said that he is writing as the chairman of the second largest political party in Pakistan and on behalf of the Pakistani nation that has always been the lead nation in UN peacekeeping across the globe.

“We have been watching in shock and horror as the state of Israel has unleashed a massacre of Palestinians in Gaza during the Muslim Holy month of Ramazan and the UN has stood by as a silent spectator,” the letter read.

Pointing out that the death toll of Palestinians in Gaza had crossed 800 with the Israeli aggression showing no sign of stopping, he said, “The residents of Gaza cannot seek escape as Egypt has kept its border with Gaza sealed. The Egyptian authorities have also prevented medical supplies from going in to Gaza and the UN has issued not a word of protest.”

“Yet the UN’s primary responsibility is to maintain global peace and to prevent aggression,” adding that according to the UN Charter’s preamble Article 2:4 to Chapter VII, the UN has a duty to ensure that people are not persecuted and states do not aggress against other states and territories.

“The Office of Secretary General has a critical role to play in the maintenance of international peace and prevention of state aggression and war,” he said, adding that Chapter XV Article 99 defines the special responsibility of the Secretary General in this regard and Article 100.1 also calls on the Secretary General not to be influenced by any state in the carrying out of his functions.

“The Secretary General has to ensure the credibility of the UN in times of crises and war”, he stated.

Referring to the notion of self-defence in given in Chapter VII of UN charter, the PTI chairman said, how can the bombing of a hospital, a cemetery and a UN school be regarded as acts of self-defence?

He added that the ICJ Advisory Opinion on the Israeli Wall further countered the Israeli claims of self-defence.

“As the world watches Israel losing all sense of humanity and breaking all international norms of behaviour, it is the UN to which it looks for intervention”, he noted.

Khan said that after the UN World Summit of 2005 the international community asserted the principle of the Right to Protect as part of humanitarian intervention and the primary responsibility for enforcing this rests with the UN and its Secretary General.

“I call on you to immediately exercise this responsibility to prevent the genocide of the Palestinians in Gaza”, he asked.

The letter further states that at present the UN is undergoing a major challenge in terms of sustaining its institutional credibility.

“As Secretary General your actions will decide whether the UN is to remain credible as the harbinger of peace, the protector of the weak and the institution that ensures aggression remains unsuccessful around the globe,” adding after all the UN was founded, “to prevent future generations from the scourge of war.” It is up to you to ensure that the UN fulfills the mandate given to it by the comity of nations.

“We cannot now allow the UN to lose all credibility because one powerful state is allowing Israel to conduct aggression against Gaza with impunity,” he said.

“ We have a right to demand that you as the Secretary General enforce the UN Charter and play an active role in halting Israeli military aggression against the Palestinian population of Gaza”, he stated.

PTI chief urged that that as Secretary General of UN, Ban must also demand and ensure Egypt open its border with Gaza to allow medical assistance and essential supplies to go into Gaza.

“You have a duty to ensure that the plan of genocide of the Palestinians by the Israeli state is thwarted. It is time for you as the UNSG to fulfill this critical duty”, he concluded.