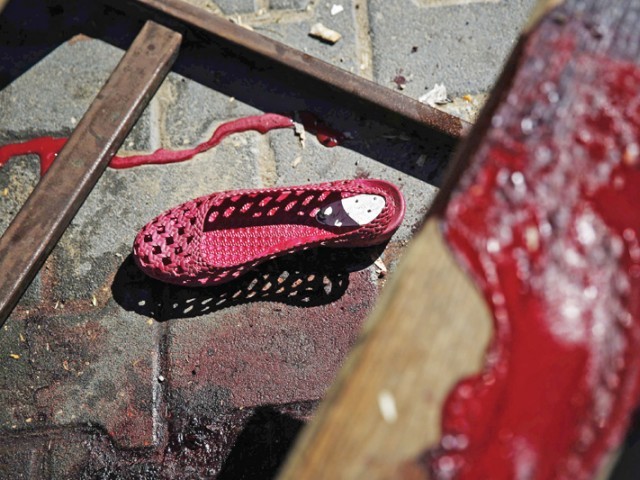 Driven by the groundswell of sympathy for the besieged Palestinians of Gaza, Prime Minister Nawaz Sharif on Thursday announced that the whole Pakistani nation would observe a day of mourning today (Friday) for the victims of Israeli aggression.

The announcement came after Gaza officials confirmed that the Palestinian death toll from incessant Israeli shelling had increased to 788 on the 17th day of the conflict.

“Prime Minister Muhammad Nawaz Sharif has announced July 25 (Friday) as a day of mourning to show solidarity with the innocent people of Gaza who have been subjected to terror and war crimes by the state of Israel,” an official statement issued by the Prime Minister’s House said. “The national flag will fly at half mast on July 25, 2014,” it added.

In addition, Prime Minister Nawaz also announced he will contribute $1 million to the UN for the victims of Israeli aggression in Gaza.

Islamabad appealed for an immediate ceasefire by Tel Aviv, while denouncing the Israeli offensive and the killing of innocent civilians in Gaza.

Talking to reporters at the Foreign Office on Thursday, Foreign Secretary Aizaz Ahmad Chaudhry called for the early restoration of peace in Gaza so that the killing of innocent people could be stopped immediately. Reiterating that Pakistan had always backed the cause of Palestine, he said  Islamabad had presented a resolution in the UN against the 17-day Israeli assault on Gaza.

He added that Prime Minister Nawaz also gave a strong statement condemning the Israeli attack and expressed sorrow and grief over the loss of lives in Gaza.

Gazan authorities said Israeli forces shelled a shelter at a UN-run school on Thursday, killing at least 15 people as the Palestinian death toll in the conflict rose to 788 and attempts at a truce remained elusive.

United Nations Secretary-General Ban Ki-moon expressed his horror at the attack on the school at Beit Hanoun in the northern Gaza Strip. “Many have been killed – including women and children, as well as UN staff,” he said in a statement. “Circumstances are still unclear. I strongly condemn this act.”

Washington said it was “deeply saddened and concerned about the tragic incident”.

US Secretary of State John Kerry will not stay in the Middle East indefinitely trying to broker a ceasefire to halt the Gaza conflict and will decide soon whether the parties are willing to come to an agreement, a senior US official said on Thursday. “Gaps remain between the parties, so his focus is on finding a formula that both sides can accept,” said the senior US official. “But he isn’t here for an indefinite amount of time and in the near future he will determine whether there is a willingness to come to an agreement on a ceasefire.”

The US diplomat is seeking to garner support for an Egyptian-drafted proposal and an aide said he had spoken to his counterparts in Doha and Ankara in the hope they would use their influence to encourage Hamas to accept the plan.

Hamas has rejected the proposal so far, with its exiled leader Khaled Meshaal saying late Wednesday that there could be no halt to the fighting without an end to Israel’s eight-year blockade on Gaza first.

The Egyptian plan calls for a ceasefire first and talks afterwards on a long-term solution to Gaza’s problems.

There was no let-up to the violence in Gaza, however, with most of Thursday’s 93 victims killed in and around Khuzaa, a flashpoint area east of Khan Yunis which has been the site of intensive fighting since Tuesday.

But the biggest single strike was at the school in the north, where the UN agency for Palestinian refugees (UNRWA) said it had been trying to coordinate with the army over the evacuation of civilians, without success.

Laila Al-Shinbari, a woman who was at the school when it was shelled, told Reuters that families had gathered in the courtyard expecting to be evacuated shortly in a Red Cross convoy. “All of us sat in one place when suddenly four shells landed on our heads … Bodies were on the ground, (there was) blood and screams. My son is dead and all my relatives are wounded including my other kids,” she wept.

Ashraf al-Qidra, spokesman for the Gaza health ministry, said that as well as the 15 dead, another 200 people had been wounded in the attack. The director of a local hospital said various medical centres around Beit Hanoun were receiving the wounded.

More than 140,000 Palestinians have fled 17 days of fighting between Israel and Gaza fighters.