“Both are member of outlawed Tehreek-i-Taliban Pakistan (TTP) and the weapons could be used in attack,” said the SP. The police claimed to have foiled a terror bid on Wednesday after arresting suspected terrorists transporting arms and ammunition.

SP Saddar Dr Ghayas identified the suspects as Noor Khan, a resident of Kohat and Asad Khan, a resident of Charsadda. He said a car from Peshawar was stopped at the Chakri Interchange and a search led to the discovery of 20 semi-automatic guns, three rifles, one telescope, 23 magazines, four pistols and 47,000 rounds.

Nineteen bottles of liquor and four kilogrammes of hashish were also recovered from them. The police have registered a case against the accused and an investigation is under way. Both suspects were also produced before a local court which gave their physical remand to the police.

“Both are member of outlawed Tehreek-i-Taliban Pakistan (TTP) and the weapons could be used in attack,” said the SP. 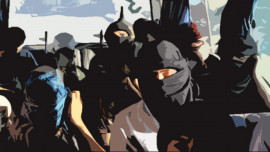 Support to govt: No shelter to militants, vows Bajaur jirga