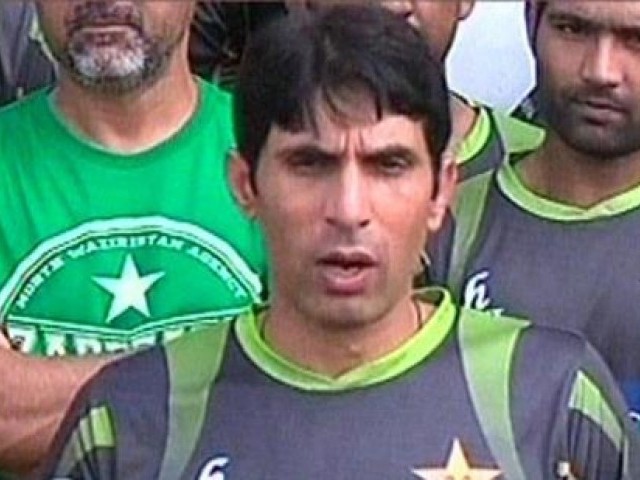 LAHORE: The national cricket team appealed to fans to donate more money for more than 800,000 people displaced by the military offensive in North Waziristan, on Tuesday.

“We feel for the people who are forced out of their homes in this ongoing battle, and we are here to show solidarity with our people and we are with our military and to hit terrorism out of the country,” said Moin Khan, a former wicketkeeper who is team manager and chief of selectors.

He was speaking at an army-run camp where members of the public can donate money and goods, and was joined by new head coach Waqar Younis, Test and one-day captain Misbahul Haq and several members of the team.

He also handed over a cheque for Rs400,000 for the cause, and promised that authorities would soon host more exhibition matches to raise more money.

“I appeal to the whole nation and people living outside Pakistan to give as much as they can to help these IDPs (internally displaced people),” Khan said.

Coach Waqar Younis added, “If we do not unite in this moment of distress our troubles will increase, so I appeal on behalf of the whole team to donate as much as possible”.

Pakistan cricket has suffered from the activities of militants.

The country has been unable to host any international cricket since an attack on the Sri Lankan team bus in Lahore in 2009.

Since then the team have played their homes series on neutral venues like the United Arab Emirates and England.