Haqqanis no exception: Operation targeting all militants, US told

Haqqanis no exception: Operation targeting all militants, US told 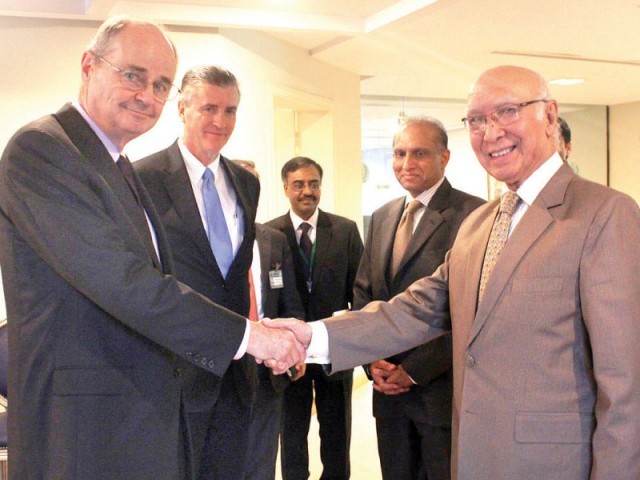 Pakistan has conveyed to the United States that its ongoing military offensive in the restive North Waziristan Agency (NWA) is targeting both local and foreign militants, including the deadliest Haqqani Network, officials said.

This was Dobbins farewell trip to Islamabad before he relinquishes the office of President Barrack Obama’s point man for the region.

A foreign ministry statement issued here confirmed that a range of issues including the operation, Zarb-e-Azb, was discussed during meeting between Aziz and Dobbins.

The statement quoted Aziz as saying that he highlighted Pakistan’s ‘monumental effort’ to address the threat of terrorism and underscored that the military operation, Zarb-e-Azb, was addressing this menace ‘without any discrimination or distinction’.

The United States had long pushed Pakistan to carry out full-scale operation against the Haqqani Network, which is said to be based in North Waziristan.

Since the operation began, both the civilian and military leadership have publicly announced that the security forces would not spare any terrorist group in what is seen as paradigm shift in the country’s approach towards dealing with the threat of terrorism.

However, some reports suggested that many of the hardcore militants including Haqqani network might have already slipped into Afghanistan ahead of the operation.

The discussions between Aziz and Dobbins also covered Pakistan-US bilateral relations and developments in Afghanistan.

The adviser took the opportunity to laud Ambassador Dobbins’ efforts for the promotion of stable, cooperative and durable relations between Pakistan and the US during his term as the SRAP.

The two sides reiterated their resolve to further deepen the bilateral relationship and strengthen mutual consultations on Afghanistan post-2014 with a view to advancing the shared objectives of peace, stability and economic development in the region and beyond.

The adviser highlighted the instrumental role of Pakistan-US Strategic Dialogue in fostering closer collaboration between the two countries in diverse fields including trade, economy, energy, counter-terrorism, education and science and technology.

Reviewing the process since its revitalisation last year, the two sides expressed satisfaction over the steady enhancement of mutual understanding and fruitful cooperation.  In the regional context, the adviser reaffirmed Pakistan’s commitment to a peaceful, stable and united Afghanistan.

He appreciated the efforts of Secretary John Kerry, who had contributed to an amicable understanding on election-related issues. Aziz also underlined Pakistan’s support for a peaceful democratic transition, underscoring its vital importance for stability in Afghanistan and the region.

The Inter-Services Public Relations (ISPR) said in a statement that during the meeting, matters of mutual interest came under discussion including post-election situation in Afghanistan and coordination along Pakistan-Afghanistan border.

A statement issued by the US Embassy in Islamabad said Ambassador Dobbins appreciated the opportunity to meet with Pakistani leadership. He reaffirmed the importance of the US-Pakistani relationship to regional stability and agreed to continue to work together in order to build a stronger partnership to advance our common objectives.