Most of them apply for asylum and pay the police to regist­er fake FIRs to suppor­t their applic­ation.
By Rabia Ali
Published: July 15, 2014
Tweet Email 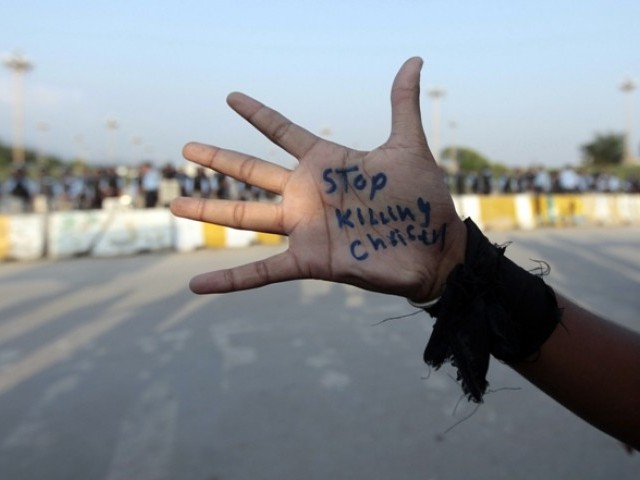 There are no official figures but community members and activists say that thousands of Christians have left Pakistan and are seeking asylum in other countries.PHOTO: REUTERS

KARACHI: It was on a warm October day that human rights activist Noel Alfonce received a call. A man simply asked him to stop his work or his 10-year-old daughter would suffer the consequences.

With a heavy heart, nearly six months later, he left his home and country behind for good.

“I wouldn’t have been bothered had they threatened me, but when it comes to your children, you sometimes have to take harsh decisions,” said the balding man, speaking over the phone from a busy marketplace in Bangkok as Thai announcements blared in the background.

The ‘crimes’ that forced him out of the country were helping victims of forced conversions and their families and visiting the burned down and bullet-riddled churches after they were attacked. His actions irked the wrong people, and Alfonce, who had been working at the National Commission for Justice and Peace for the last four years in Karachi, had to wind up his work and leave.

There are no official figures but community members and activists say that thousands of Christians have left Pakistan and are seeking asylum in other countries.

From Karachi, many Christian families have fled silently; from Dastagir, Pahar Ganj, Mianwali Colony, Akhtar Colony and Essa Nagri. A majority of them opt for Thailand, which offers cheap airfare and easy access to tourist visas.

“Apart from personal attacks and threats, the Badami Bagh incident in Lahore and the church bombing in Peshawar have led to an increase in migration of Christians. Unemployment and lack of security are making them leave,” said former parliamentarian and minority representative Michael Javed.

But Alfonce, whose bike was riddled with bullets when he spoke against a church attack in Karachi’s Mianwali Colony in 2012 and received death threats in September of last year after he condemned the killing of a Christian accused of blasphemy, has no one to share his grievances with.

“Who do I complain to? The government has no writ and it is the terrorists who are in control now,” he said.

With a quivering voice, he added, “I don’t know what I will do when my savings run out next month. I don’t know how we will survive.”

For several months, 40-year-old Aslam Masih, a sweeper at the Karachi Metropolitan Corporation, had made up his mind to emigrate.

Last December, when a PMT crashed down near his house in Taiser Town, plunging the Christian colony into darkness, his decision was made.

“We had no light, no gas, no water. We had no better jobs. We were living like animals,” he said, also speaking from Thailand over the phone.

A pastor, Moazzam, who had helped several Christians move to Thailand, was contacted and paid Rs100,000 to arrange for the travel of six family members of Aslam; for their visas, their tickets and their documentations.

In order to arrange the amount, Aslam sold the house that he had built on the plot he received from authorities after being relocated from Lyari.

His father, Mahar Bahadur Masih, who decided to stay back in Pakistan, did not want his son to leave. “I tried to stop him but he would say to me, ‘Bhool jaye Pakistan ko [Forget Pakistan]’. Now my other son wants to go as well. I have no incentives to offer them in order to try and stop them from going.”

In the gutter-ridden lanes of Essa Nagri, Pastor Rafaqat Sadiq of The United Presbyterian Church of Pakistan has written five support letters and sent several emails to churches in Thailand. “I issue letters to the families that have migrated so that our churches there help them with accommodation and food,” he said.

To strengthen their cases, asylum seekers sometimes also get fake cases registered at police stations, bribing officers Rs20,000 to do so, claimed Sadiq.

Life in Thailand is no bed of roses

Christian representatives in Thailand claim that there are 10,000 registered Pakistani asylum seekers, a majority of them Christians and the remaining mostly Ahmadis and Shias.

But life in the country famous for its beaches and tourist spots is far from rosy for asylum seekers.

Upon reaching Thailand, they file an asylum application to the United Nations High Commissioner for Refugees (UNHCR), and then wait patiently. They live in single-room apartments, or condos, often in cramped and crowded areas of Thailand.

“Life is not easy at all. We are stuck here. We can’t work. I have seen Pakistanis begging on the road, asking money from foreigners. The asylum process takes a very long time,” said Alfonce. The former human rights activist, who is volunteering at a church school, has an interview set with the UNHCR in February 2016. He has been lucky; people have been known to be given dates in 2019.

“After the interview, the UN will decide whether we qualify for asylum in another country or not. Till then, we are to support ourselves on our own,” he said.

With the visit visa lasting only two months, people often dodge the Thai police, or pay bribes, in order to avoid being arrested for illegally staying in the country.” Seventeen Pakistanis were arrested just last week and sent to an Immigration Detention Centre,” he said.

But for some, the harsh conditions are still preferable to those in Pakistan. Aslam’s eldest daughter, Parveen, who has a technical diploma, said that she can easily go out with her sisters and travel freely. “There is no danger to our lives here. I feel safe here. I don’t want to go back,” said Parveen.

Hoping for a better life

With many of the minority’s migrants being social workers and pastors, a human rights activist, also wants to leave.

“My husband faced a blasphemy case when the landlord accused him of discarding Islamiat books. The case was settled when our neighbours supported us. But this is scary and alarming. I want to leave now,” said the Christian woman, not wanting to be named.

Human Rights Commission of Pakistan chairperson Zohra Yusuf said that the state has failed to stand up for minorities. “It is unfortunate and sad that the minorities are leaving the country as they are being persecuted.” On the other hand, former parliamentarian and minority representative Michael Javed feels that incidents of Christians leaving the country are not being given importance. “When Hindu families were leaving Pakistan, everyone was raising the issue. But why are they silent over our migration? Are we not also citizens of the country?”