Bad for business: In Pakistan’s last border town before China, a schism deepens over a slap

Bad for business: In Pakistan’s last border town before China, a schism deepens over a slap 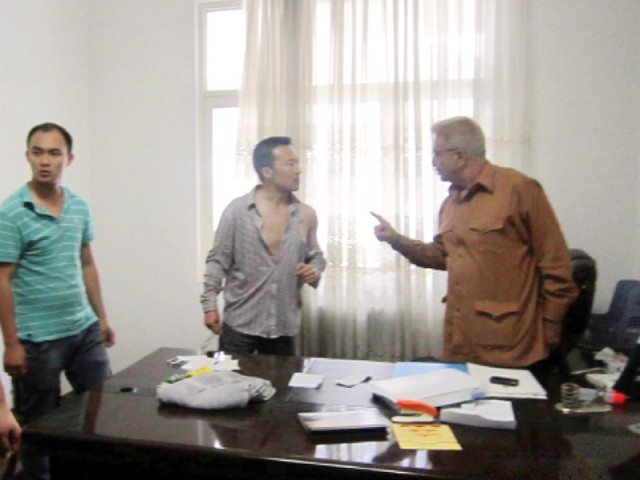 This photograph was shared with Pamir Times by Gul Sher Khan, the port’s PRO. He claimed that the Chinese official was beaten while on the other hand, Zafar Iqbal, who appears to be in the brown shirt, has said that he was attacked inside his office with a knife or clip. PHOTO COURTESY: PAMIRTIMES.NET

In Sost, all it takes is a slap to bring life to a halt.

It was allegedly administered on Saturday and is still sending shockwaves through the town that signals you are close to China.

The recipient of the slap is said to be a female Chinese staffer at the Sost Dry Port which is part managed by the company Sino-Trans. Matters came to a head on Thursday when the Chinese staff closed the gates and did not let anyone in to protest the manhandling. The police intervened and restricted the Chinese staff to their residential quarters. The port will open on Monday, though, the spokesman for Sino-Trans company, Gul Sher Khan told The Express Tribune on Saturday.

The physical assault is, however, just one twist in the plot that runs much deeper into the struggle for the ownership of the dry port itself.

The tussle is between the old and new management.

Sost is the first formal port at the China-Pakistan border, clearing goods coming from the Chinese region of Kashghar, Xinjiang. It was opened in 2001 as a joint venture between the Sino-Trans Chinese company and the Sost Dry Port Trust, an entity representing local shareholders. The Chinese side holds 60% of the shares while the rest is owned by local investors, including women’s and village organisations, as well as individual investors. The Chinese investors control the management and their representation on the board is also placed higher, in line with the ratio of investment.

According to the agreement, the management of the port was to be handed over to Pakistan by the Chinese after 10 years.

The new management was elected in August 2013 with Zafar Iqbal as chairman. A retired bureaucrat who also previously worked in a government-supported transport company called NATCO, Iqbal says when he went to assume office, he was refused access. This is corroborated by a letter a magistrate, Mir Alam, wrote to update the deputy commissioner on the situation. “The chairman, Zafar Iqbal, and his directors had requested [access to] the office but Mr Zhang Yi refused to vacate [it] without permission from the Chinese chairman.”

A court also ordered the authorities to have the office vacated. The deputy commissioner of Hunza-Nagar was told by the chief minister’s secretariat on June 24 to execute the court order to “vacate the office of the vice-chairman occupied illegally by the Chinese partners”.

On Saturday, July 12, the government issued a notification saying that for 20 days the Sost Dry Port would be managed by the old set-up, that is, the Chinese.

On Saturday July 5, Pak-China Sost Port Company spokesman Gul Sher Khan accused Zafar Iqbal of forcing his way into the dry port’s office with 20 party workers, lawmaker Mutabiat Shah and Gilgit-Baltistan Speaker Wazir Baig. Baig is accused of slapping a female Chinese employee. There appears to have been a scuffle over the office.

Wazir Baig maintains, however, that he was just popping in to survey the progress of development projects in the area. While passing though the dry port, he said he thought to stop over to see the Chinese official as a goodwill gesture. “But to my surprise they [the Chinese] didn’t turn up, even though I waited for almost half an hour in the port,” said Baig. He denies that he or any other member misbehaved with their staff, let alone beat them. “It is wrong [to say] that the doors of the office were broken. A magistrate accompanying us opened it in the presence of many people to let the incumbent assume office, denied to him by the other group illegally.”

It is not clear why he was present specifically on the day the magistrate’s action was to take place if he was just popping in for a courtesy call.

The allegation of the slap was also rejected by Zafar Iqbal, who claimed instead that he was attacked and injured by a Chinese staffer with a knife as he entered the office to assume work as mandated by a court order.

Both sides have registered cases against each other at the local police station.

In one FIR, three Chinese officials and two of their alleged local accomplices, were nominated for allegedly attacking Zafar Iqbal and occupying the trust’s office in defiance of the court order. A Chinese citizen identified as Ju Yi alias John was nominated as the main accused for leading the alleged attack on Zafar Iqbal.

In the second FIR, the Chinese company wanted to nominate Speaker Wazir Baig but the police rejected this application, saying it wasn’t possible under the rules. Instead, according to the dry port’s spokesman Gul Sher Khan, Zafar Iqbal and 12 others were nominated in the FIR. Among the offences was breaking the doors to the office and misbehaving with the staff.

Additionally, the government decided that a tehsildar would oversee the port to keep an eye on any other outbreaks of violence.