Israel has confir­med prepar­ations are under way for a possib­le ground attack, with tanks seen massin­g along the border­
By AFP
Published: July 10, 2014
Tweet Email 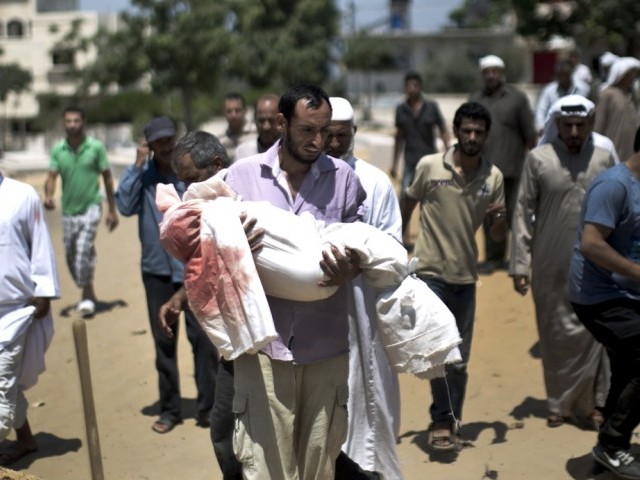 Palestinian mourners carry the body of five-year-old boy Abdallah Abu Ghazal during his funeral in the northern Gaza town of Beit Lahiya on July 10, 2014 after he was killed in an Israeli air strike. PHOTO: AFP

Five children and four women were among 27 people killed in Israeli air strikes on Thursday, medics said, with most of the bloodshed in Khan Yunis.

Palestinian president Mahmud Abbas has accused Israel of committing “genocide” in Gaza, but Israel showed no sign of letting up, with six children among 27 Palestinians killed in air strikes carried out since midnight (2100 GMT).

And Israeli Prime Minister Benjamin Netanyahu has vowed even tougher action against Hamas, despite growing international calls for a ceasefire in the worst confrontation in and around Gaza since 2012.

So far, there have been no Israel deaths but Hamas has kept up a steady barrage of rocket fire on cities in central Israel, sending people fleeing for cover as air raid sirens rang out in cities as far away as Jerusalem, Tel Aviv and even Haifa.

“We are facing long days of fighting and Hamas attempts to surprise Israel with attacks from the air, sea and land,” Israeli Defence Minister Moshe Yaalon said Thursday.

The violence has emptied the streets from Gaza City to Tel Aviv, as both Israelis and Palestinians take shelter indoors for fear of being caught in the open when the next rocket or missile hits.

On the beachfront in Tel Aviv, cafes which would normally have been bursting at the seams at the height of tourist season, sat empty, their waiters nervously checking the phones for any news of an incoming missile.

But in cafes in Gaza, the story was much darker after an Israeli missile slammed into a coffee shop in Khan Yunis, killing eight as they watched a World Cup semi-final match. Another 15 people were injured.

And Israel has confirmed preparations are under way for a possible ground attack, with tanks seen massing along the border and Netanyahu facing mounting pressure from hardliners within his coalition to put boots back on the ground in the territory from which Israel pulled all troops and settlers in 2005.

A senior official told reporters on Thursday Israel’s goal was to get Hamas to stop “the launching of rockets and carrying out terror attacks against Israelis.”

“If we can achieve our goals without a ground operation, we would prefer it this way,” said the ministry of strategic affairs director general Yossi Kuperwasser.

“Gaza is on a knife edge. The deteriorating situation is leading to a downward spiral which could quickly get beyond anyone’s control,” UN chief Ban Ki-moon warned ahead of an emergency meeting of the Security Council at 1400 GMT.

“The risk of violence expanding further still is real. Gaza, and the region as a whole, cannot afford another full-blown war,” he said.

Ban spoke with Netanyahu, urging him to exercise maximum restraint, although he described the Gaza rocket attacks as “unacceptable and must stop”.

He also spoke with Abbas, Egypt’s President Abdel Fattah al-Sisi and US Secretary of State John Kerry over the crisis, which drawn calls for restraint from Washington and the European Union.

As the number of victims in Gaza rose, Egypt opened the Rafah border crossing, with hospitals in north Sinai placed on standby to receive the wounded, Egypt’s official MENA news agency reported.

The Israeli military said it had hit more than 300 targets overnight, raising the total number of strikes in just over 48 hours to 750, in Israel’s largest military operation in Gaza since November 2012.

The air offensive has so far failed to staunch the rocket fire, with 84 rockets hitting Israel on Thursday and another 12 intercepted by Iron Dome.

Neither side has shown any sign of backing down, and Israel has approved the call-up of 40,000 reservists as it steps up its preparations for a possible ground assault.

Analysts said Hamas and its backers had a clear aim for their military build-up: to drag Israel into a ground war hoping to inflict a heavy number of casualties.

There would also be a possibility of capturing Israeli soldiers for prisoner swaps.