At least 18 killed in new attacks in Kenyan coastal region

At least 18 killed in new attacks in Kenyan coastal region 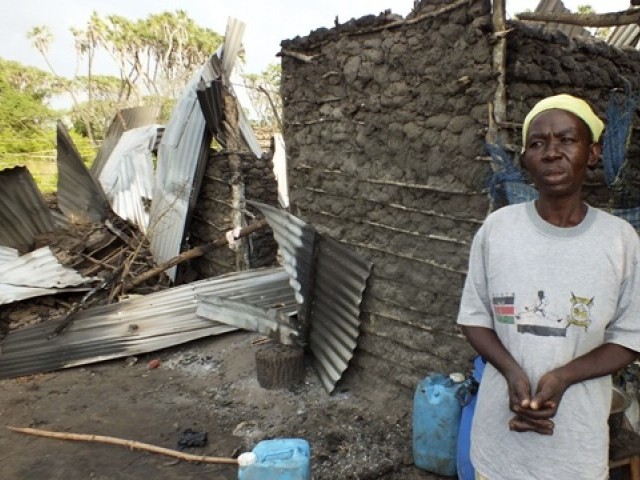 A woman stands outside her house, destroyed after gunmen attacked Hindi village .PHOTO:REUTERS

HINDI: At least 18 people have been killed in new attacks in Kenya’s Lamu coastal region, the same area where some 60 people were massacred last month, the Kenyan Red Cross said on Sunday.

A spokesman for Somalia’s Shebab rebels claimed that the al Qaeda-linked group’s fighters had carried out another attack in the area.

The Red Cross said nine people died and one person was missing in the locality of Gamba in Tana River county, while nine people were killed in Hindi, a trading post in Lamu county. The areas were attacked late Saturday, authorities said.

“We had attacks at night where people were killed and houses destroyed. We have mobilised our officers and we are on the ground. We are calling on the public to work closely with us,” said Robert Kitur, a senior Lamu police official.

An AFP reporter in Hindi said all the dead in the town were men, apart from a teenage boy, who was reportedly shot as he tried to run away.

The attackers also left messages scribbled in English and Swahili on a blackboard taken from a school.

“You invade Muslim country and you want to stay in peace,” one message read in an apparently rhetorical question.

Resident Elizabeth Opindo said she spoke to the attackers, who torched her home but let her alive, saying they did not kill women.

She said there were about 10 attackers, speaking a mix of English, Swahili and Somali, all common Kenyan languages.

“They said they were attacking because Muslims’ lands were being taken,” she told AFP.

In a statement issued just hours after the violence, Somalia’s Shebab rebels said they were responsible for the killings.

“The attackers came back home safely to their base,” Shebab military spokesman Abdulaziz Abu Musab said, adding the militants had killed 10 people.

The Shebab also claimed responsibility for last month’s attack at Mpeketoni, saying it was in retaliation for Kenya’s military presence in Somalia as part of the African Union force backing the country’s fragile and internationally-backed government.

Survivors of the massacre in Mpeketoni, and another attack the following night in a nearby village, reported how gunmen speaking Somali and carrying Shebab flags killed non-Muslims in revenge for Kenya’s presence in Somalia.

Kenyan President Uhuru Kenyatta, however, denied that the Shebab were involved and instead blamed “local political networks” and criminal gangs, saying victims had been singled out because of their ethnicity.

Mpeketoni is a mainly Christian settlement in the Muslim-majority coastal region, which was settled decades ago by the Kikuyu people from central Kenya, the same tribe as Kenyatta.

Police also arrested alleged separatists from the Mombasa Republican Council, a group that campaigns for independence of the coastal region, as well as the opposition-affiliated governor of Lamu county.

The unrest in the coastal region has badly dented Kenya’s tourist industry, a key foreign currency earner and massive employer for the country, at one of its traditionally busiest times of the year.

Lamu island is a well-known tourist destination whose ancient architecture is listed as a UNESCO World Heritage site.