Curbing the call to arms

Curbing the call to arms 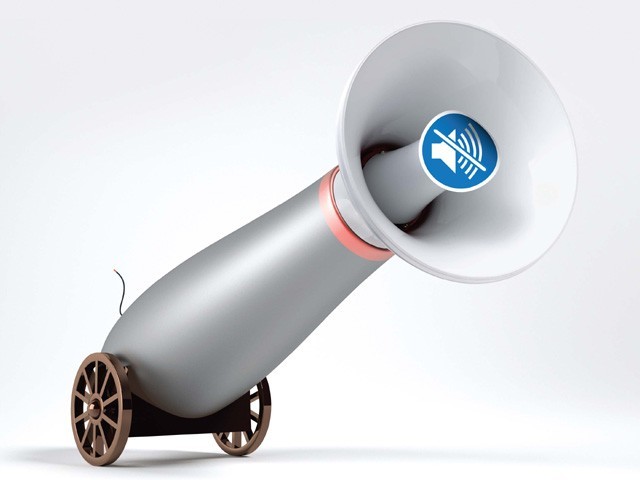 ISLAMABAD: A bill seeking stricter punishment for misuse of loudspeakers and amplifiers was tabled in the National Assembly on Friday.

It is observed that some religious leaders belonging to different sects are misusing loudspeakers inciting sectarian hatred among the people in the federal capital. The bill will attempt to curb the divisive influence of these leaders.

The bill proposes that the “West Pakistan Regulation and Control of Loudspeakers and Sound Amplifiers Ordinance 1965” be amended in its implication to the Islamabad Capital Territory (ICT).

Ministry of Interior maintains that sectarianism is a major threat to humanity and the ordinance will provide a mechanism to control the misuse of amplifiers and loudspeakers in this regard.

According to the bill, violators and instigators may be punished with imprisonment for a term no longer than three months or a fine extending to Rs1,000 or both.

The Ordinance was last amended in 2007. Former president Pervez Musharraf had directed SHOs to send written directive to leaders of mosques in Islamabad.

Since then under the Amplifier Act, use of the mosque’s loudspeakers for purposes other than Azan and Friday sermons is against the law.

The letter clearly warned Ulema to obey the law or face action.

Most Ulema of Islamabad had refused to accept the letter and act in accordance to the government’s directives concerning the use of loudspeakers.

But Advocate Supreme Court Zulfiqar Bhutta termed the newly tabled bill a futile exercise. He said that what was really required was the implementation of the already existing act.

“Just increasing the unimplemented punishment will not settle this sensitive issue,” he added.

Spokesperson for Wafaqul Madaris Qari Abdul Qaddus claimed to have been following the act since 2007 and said that he welcomed the new bill.

“These punishments are not just for Ulema. Notice should also be taken of open concerts, pressure horns in vehicles and loud music system in houses.

Despite numerous attempts, the spokesperson for Islamabad Traffic Police could not be contacted.