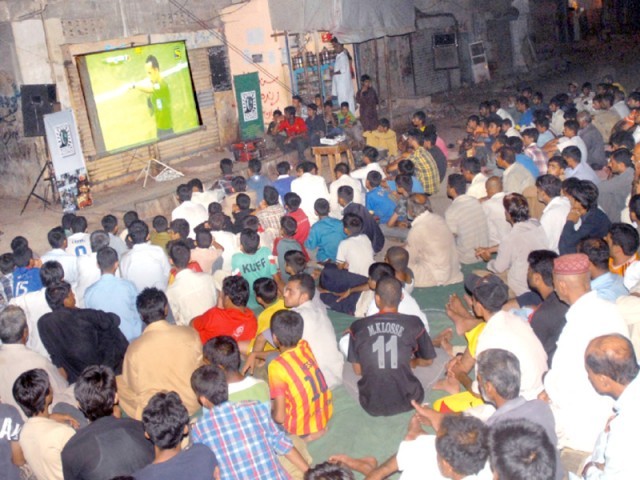 Keeping up with the Fifa World Cup fever, youngster Junaid Tariq and his Azad Baloch FC teammates are participating in the Play for Peace Football Tournament with seven other teams at the dimly lit Gabol Park at the edge of Lyari’s Union Council (UC) 10 and UC 11.

They defeated Lyari Central FC 3-0 to reach the final, while Idea FC beat Lyari United 2-0 to book a 40-minute faceoff against Azad Baloch.

Young footballers like Tariq and Nuzair Ali are undeterred by the late timings of the matches, saying that even their mothers encouraged them to play football.

“It isn’t a problem, my mother wants me to play football,” Nuzair told The Express Tribune.

“We are the best team, and others are a little jealous of us. So we need to win this tournament.”

Meanwhile, event organiser Jihand Shaukat Ali said that local tournaments in Lyari have not been the same since last year, when there was a bomb blast at a street football tournament.

“Mostly it’s just the children or us, the volunteers,” said Shaukat. “Others don’t want to come because they fear a repetition of last year’s bomb blast.”

According to Shaukat, all the club players are under the age of 16 and all of them aim to change their lives. When these children leave the football field, they take away lessons for life.

“It’s not about winning and losing,” explained Shaukat. “Our aim is to teach the importance of teamwork to these children.”

Project Supervisor Fahim bin Tariq further explained the nature of the ‘lessons’ in detail, “When each child passes a ball to another, they are told that it is an equivalent of respecting the other player.

“When they dribble in the field, it stands for improving the self-esteem and when they aim for a goal, it is a lesson for them that in life they need to set a goal for themselves in order to survive.”