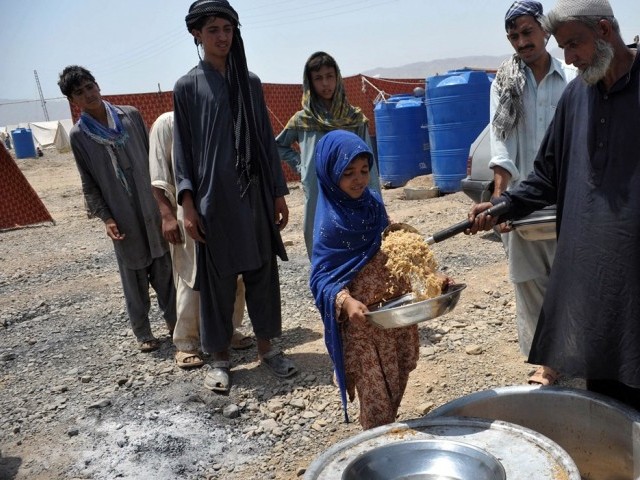 Two internally displaced persons (IDPs) were injured, as well as a police officer, when a scuffle broke out at a ration centre outside Bannu city on Monday.

Police official Yasin Kamal said the incident took place at Ziyad Akram Khan Durrani Sports Complex Bannu at 10am when some IDPs were waiting in line to receive food rations. When some members of the queue began pushing and jostling others, police tried to control the crowd. A constable, identified as Attaullah, was hit on the head with a brick by one of the IDPs who then ran away.

Those in the queue soon began pushing, hitting or punching each other to receive rations and two people were injured. The injured police official was taken to the DHQ Bannu while the two IDPs were taken to a relief camp to receive first aid. Police officials said security measures were subsequently tightened and the IDPs attempting to block the roads were dispersed.

Nearly half a million residents of North Waziristan have been displaced by Operation Zarb-e-Azb since mid-June. Temperatures have reached 50 degrees Celsius and fights over food rations have become commonplace, particularly ahead of the month of Ramazan as many complain of food shortages.

At a food distribution point in Bannu, 55-year-old Niaz Wali Khan told AFP he had queued for rations for four days but came away empty-handed each time. “We have spent all our money paying to rent vehicles to get here and for accommodation. Now it seems we will only have water left to break our fasts,” said 43-year-old Jalat Khan, who was also standing in line for rations.

“My house has been bulldozed and my car was destroyed in a bombing,” said 40-year-old taxi driver Shakeeb Ur Rehman. “I’m homeless and seriously worried about fasting in this hot weather. I think religious scholars should issue a decree allowing us to be exempt.”