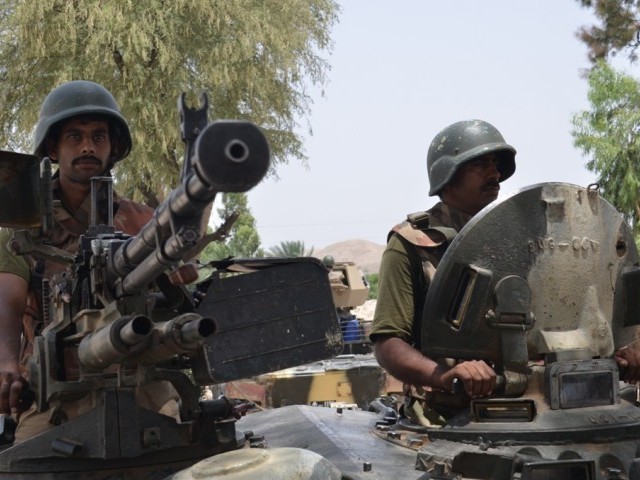 The heavy bombardment of Miramshah, the main town of North Waziristan tribal district, began at 6:00am, according to local intelligence and military sources. PHOTO: ISPR/FILE

BANNU: The military shelled a strategic town with tanks and artillery Thursday in the latest round of its offensive against militants in North Waziristan.

The heavy bombardment of Miramshah, the main town of North Waziristan tribal district, began at 6:00am, according to local intelligence and military sources.

It comes after nearly two weeks of air raids on militant targets as part of an operation aimed at wiping out longstanding militant strongholds in the area, which borders Afghanistan.

“The army has started using artillery since 6:00am today and has bombarded Miramshah bazaar and Zafar town areas through cannon and tanks,” an intelligence official in Miramshah told AFP.

Another intelligence official and a senior military official confirmed the information.

A full assault by ground troops has been expected for some days and the intensification of the shelling could indicate that it is now imminent.

Almost half a million people have fled North Waziristan in anticipation of a ground offensive, with many flooding into the nearby town of Bannu and tens of thousands crossing into Afghanistan.

The military says 361 militants have been killed in the offensive, dubbed “Zarb-e-Azb” after a sword used in battle by Prophet Mohammad (pbuh), although the number and identity of the victims are impossible to verify.

Resistance from the insurgents has been relatively light, leading to fears that many of them may have escaped across the rugged, mountainous border into Afghanistan.