Demand­s it ensure safe evacua­tion of those still trappe­d in NWA.
By Our Correspondent
Published: June 25, 2014
Tweet Email 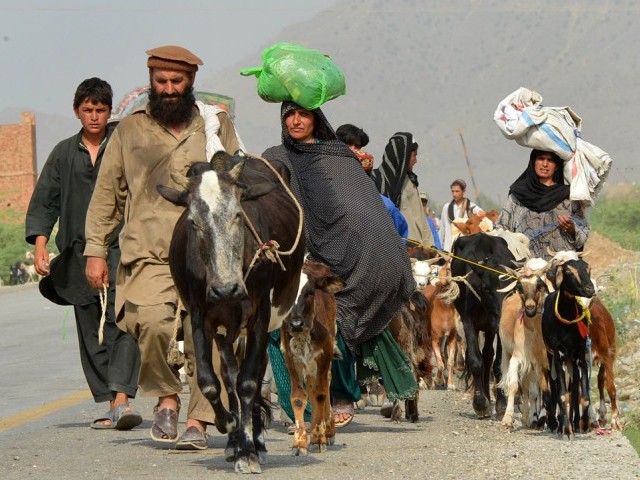 Gulalai reiterated that a Ramazan package will be provided to the IDPs in addition to free treatment in camps of eight districts in the province. PHOTO: AFP

In a statement issued on Tuesday, Gulalai said the prime minister (PM) ordered a military operation without making any arrangement for those who would be displaced. Those people are now homeless, she added.

Gulalai said the government promised to provide transport to the IDPs but many women and children are covering long distances on foot. She expressed her concern over the ban on the entry of IDPs in Sindh, Punjab and Balochistan and termed it a violation of the Constitution of Pakistan. “Despite being the PM, Nawaz Sharif has not once visited any camps to see the plight of these people,” she added.

Almost 0.45 million people have migrated out of NWA with their families, leaving their homes and lives behind for the stability of Pakistan and they should be welcomed instead of being abandoned in this time of need, said Gulalai.

She alleged the centre did not inform the Khyber-Pakhtunkhwa government before launching a military offensive despite knowing the influx of IDPs will raise problems in the province.

Gulalai reiterated that a Ramazan package will be provided to the IDPs in addition to free treatment in camps of eight districts in the province. She added the provincial government is also providing electricity, water and other facilities in the camps set up by the centre.

She demanded the government release funds for IDPs to the province on an emergency basis and take measures to ensure the rest of the innocent people trapped in NWA are transported safely.