'At least 113,000 people have fled N Waziristan since initial air strikes in May'

'At least 113,000 people have fled N Waziristan since initial air strikes in May'

Three-day window to allow civili­ans to leave the area due to end on June 20
By AFP
Published: June 19, 2014
Tweet Email 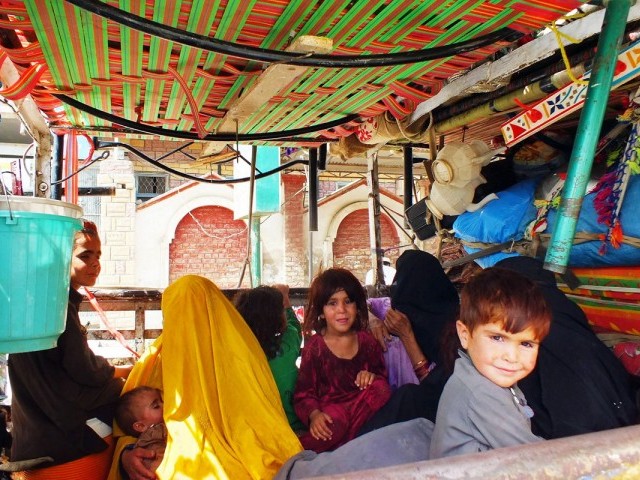 A family with all their belongings packed in the back of mini-truck seen in Bannu fleeing the military operation in North Waziristan tribal agency. PHOTO: AFP

BANNU: Civilians are streaming out of North Waziristan in a two-pronged exodus ahead of an expected ground assault against militants, officials said Thursday, with many crossing the border into Afghanistan.

The military is waging a long-awaited offensive against insurgents holed up in North Waziristan and began pounding targets with air raids and artillery fire on June 15.

Tanks and troops have been mobilised and are expected to begin a new, more intense phase of the operation after a three-day window to allow civilians to leave the area, due to end on June 20.

Officials say that at least 113,000 people have fled North Waziristan since initial air strikes began in May.

That represents more than a fifth of North Waziristan’s estimated total population but the true size of the exodus is likely to be even larger, as official figures only count people who register with the authorities.

Most of those escaping have gone to the town of Bannu, which neighbours North Waziristan in Khyber-Pakhtunkhwa.

Arshad Khan, director general of the Federally Administered Tribal Areas (Fata) Disaster Management Authority, told AFP that 51,000 people had arrived in Bannu since June 18, when a shoot-on-sight curfew was eased to allow civilians to get out.

But significant numbers have also flowed over the porous frontier into eastern Afghanistan.

“So far, an estimated 4,000 families have crossed into eastern Afghan provinces and the displacement is increasing,” an official responsible for monitoring the displacement on the Afghan border told AFP.

“Afghan authorities have yet to prepare a final report but up to now they have provided assistance to 818 Pakistani families.”

Authorities in the eastern Afghan province of Khost have set up a camp to provide displaced people with food and other essentials, the official said.

Akbar Zadran, a senior government official in Khost told AFP by telephone that 1,000 Pakistani families had been registered by Thursday while thousands more had taken shelter with the local population.

There have been fears that militants could use the cover of the civilian evacuation to slip out of North Waziristan.

Soldiers searched vehicles leaving the area on Thursday leading to long queues of vehicles waiting to get out of Miramshah, the main town of North Waziristan.

Vehicles are in short supply and owners are cashing in on the sudden demand.

“A vehicle which used to be available for 4,000 rupees now costs 40,000 rupees and even at this fare it is almost impossible to find one,” a resident waiting to move out his family told AFP in Miramshah.

A sombre atmosphere prevailed in the town as people packed up their belongings and loaded them on whatever vehicle they could find. Some were reduced to attempting the 60-kilometre journey to Bannu on foot.

The Pakistani military launched the offensive – a longstanding demand of the United States – on June 15, a week after an attack on Karachi airport killed dozens and marked the end of a troubled peace process.