Tribes­men to be evacua­ted in three phases over three days.
By Our Correspondent / Nasruminallah / Kamran Khan
Published: June 19, 2014
Tweet Email 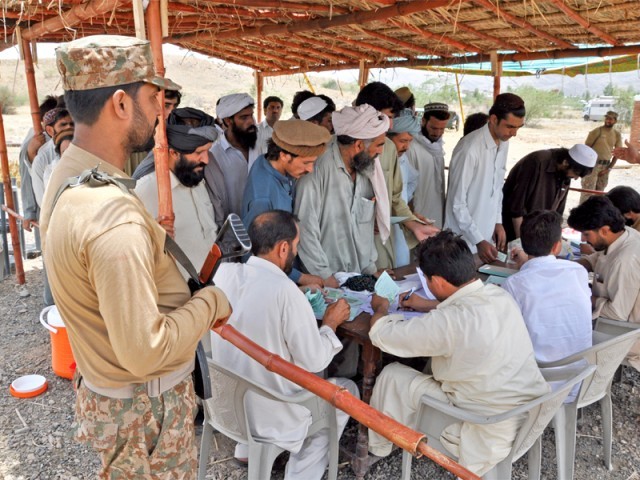 After three days of massive use of firepower, the military did not conduct any air or ground offensive in North Waziristan Agency on Wednesday as the local administration relaxed curfew to facilitate evacuation of tribesmen from the troubled region.

The curfew will be relaxed from 5am to 7pm for three days to help local tribesmen evacuate the region where the military is conducting the operation codenamed Zarb-e-Azb, an official of the political administration told The Express Tribune.

According to the schedule, on the first day, residents of Mirali and Razmak subdivisions will evacuate after registering at Esha and Khajori check posts. After completing the registration process, they will be allowed to go to the area of their choice. “They will be free to seek shelter at temporary camps set up by the government or live with their relatives in other parts of the country,” the official added.

Similarly, residents of Miramshah and Ghulam Khan subdivisions will evacuate on the second day and tribesmen of Datta Khel and Boya tehsils will move out on the third day after registering at designated check posts.

A medic at the Agency Headquarters Hospital Miramshah told The Express Tribune on the condition of anonymity that they have also been ordered to shift the patients from the agency.

In Islamabad, a military official told The Express Tribune that no air strike or any ground offensive was carried out on Wednesday. The official, who wished to remain anonymous, confirmed that the weeklong curfew had been eased in the troubled region in order to facilitate the residents to go to safe places before the start of a full-fledged ground offensive.

Despite the air strikes, the military has yet to launch a ground offensive. The official said the security forces continued to cordon off militant strongholds in the area.

The relaxation of curfew has triggered an exodus from different areas of North Waziristan as the neighbouring Khyber-Pakhtunkhwa district of Bannu saw an influx of displaced tribesmen. Taking advantage of the situation, local transporters have also hiked fares.

The tribesmen, officially designated as internally displaced persons, or IDPs, are seeking shelter in different state-run schools of Bannu district, while a camp set up by the government is lying vacant because the displaced families have refused to move there.

Federal Minister for SAFRON Abdul Qadir Baloch said the government was giving Rs12,000 in cash to each of the displaced families besides medical facilities. While talking to journalists at the Commissioner Office in Bannu, he said Operation Zarb-e-Azb would continue till all foreign militants were eliminated.

Baloch said the government would provide all facilities to the IDPs and no slackness would be tolerated in the process. “The tribesmen have rendered huge sacrifices for the country and their tribal traditions will be honoured,” he added.

K-P Chief Minister Pervaiz Khattak said evacuation of the tribesmen trapped in North Waziristan was a priority for the government. “We’re ready to provide all possible support to the IDPs from provincial resources,” he told a news conference at the Chief Minister House on Wednesday.

“We do not need any international support. We’ve offered to shelter the IDPs in state-run schools in settled areas but most of them prefer to live with their relatives,” he added. The provincial government has set aside Rs350 million, federal government, Rs500 million, and FATA Disaster Management Authority has committed Rs100 million for the IDPs.

“We have also made arrangements to vaccinate the children of IDPs against polio,” Khattak said, adding that no inoculation campaign had been undertaken in Waziristan for the last two years due to security concerns.

Hundreds of tribesmen have reportedly shifted to the Afghan province of Khost, Paktia and Paktika where the Afghan authorities have started their registration. Khattak, however, tried to downplay the development. “The movement of tribesmen from both sides of the Durand Line is a general trend,” he said. “We cannot say that they are refugees there. Most of them have relatives in Afghanistan.”